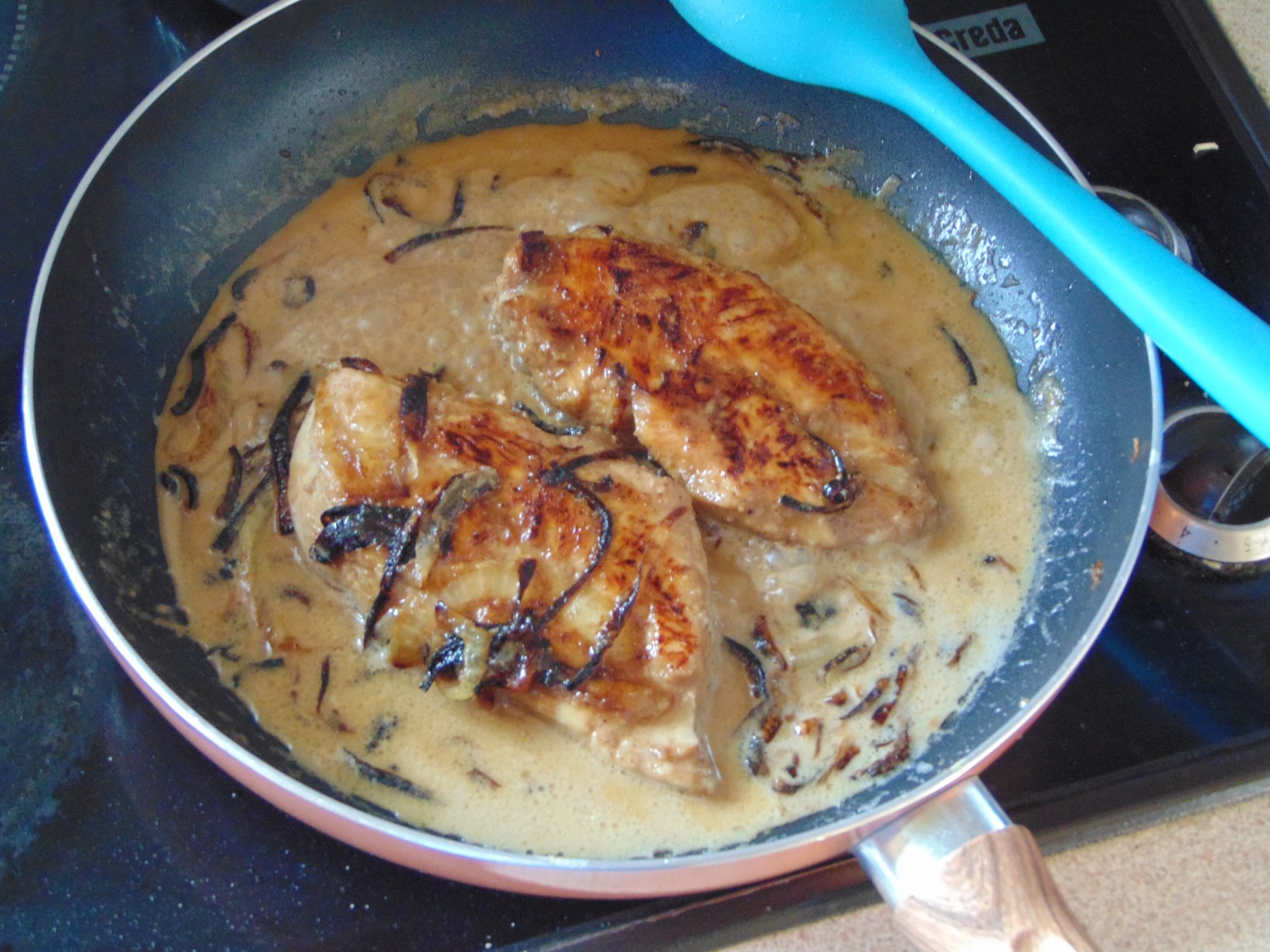 I’m on a fried onion kick. I’ll get bored eventually.

This style of post has proved useful, Dear Reader, I play around with various recipes in the usual course of weekly meal preparation and being able to share old recipes like this is useful. The Cinnamon Chicken Rub is about four years old, according to the creation date of the text file, yes, I really keep them all in the most basic way possible, which in terms of recipes is ancient. I honestly forgot about this, I generally use the Sweet Sweet Potato Seasoning whenever I want a “sweet” cinnamon flavour. I often think that my recipes are a fine line between stew and smoothie. You can play with the balance of sweetness in savoury recipes and dance long the knife’s edge between a caramel sauce and a rich, but sweet sauce, I have eaten chicken in an accidental caramel sauce and that is not recommended, here the onions cut the cloying sweetness and searing the honey slathered chicken adds a slight burnt taste. I really sat there last night scribbling at a crossword thinking this up, knowing it’d be worth a try if nothing else, I was prepared to sit down to a caramel chicken again, but thankfully it worked out. As lax as I may seem, Dear Reader, I never put you onto a bad thing. 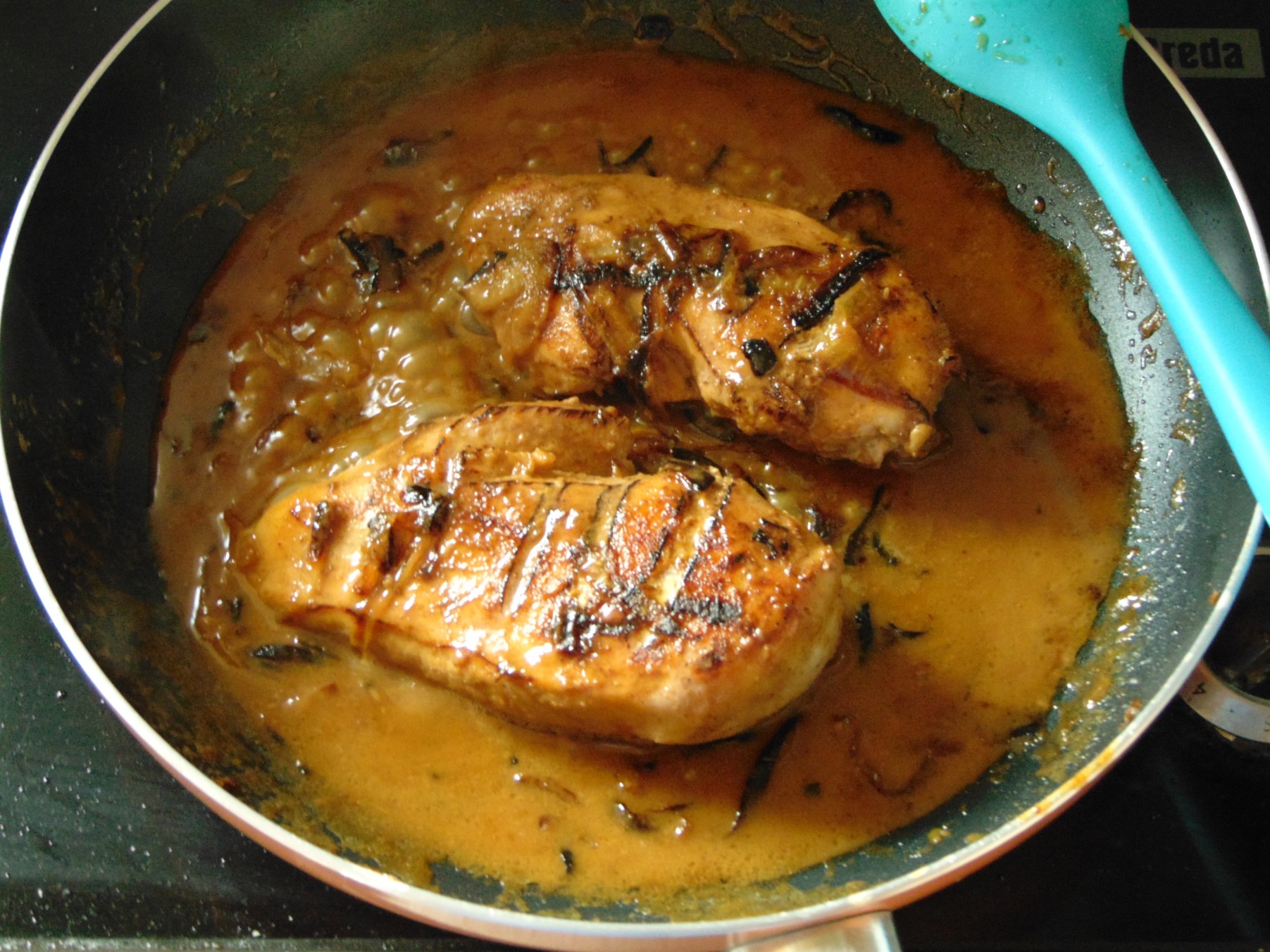 This really takes a while to reduce.

So, I love the loose format of these, it’s freeing, you need the rub, as is, with about a tablespoon of honey, mix all that in a bowl and slash some chicken breasts, then smush everything together, it might take a little bit of mixing to make it adhere, but you’re adding the marinade anyways so don’t worry too much. I fried the onions, add a pinch of salt too, I think it draws out the moisture, in olive oil rather than butter, I like either, but it changes the taste, while you’re doing that cut rounds of sweet potato and toss them in extra virgin olive oil and the aforementioned sweet sweet seasoning, in the oven, at 175c Fan, for about forty five minutes, turning occasionally,  None of this is exact, Dear Reader, just me ad libbing, so, onions until they’re starting to brown, rice is Whole Grain Basmati, a great recipe I have had from the start, fluffy rice with no draining, add the chicken at a high heat, pouring over whatever is left in the bowl, cook both sides for two minutes, then reduce the heat, let the pan cool a little, and add the coconut milk and just gently simmer until it reduces and darkens. Flip the chicken now and then. 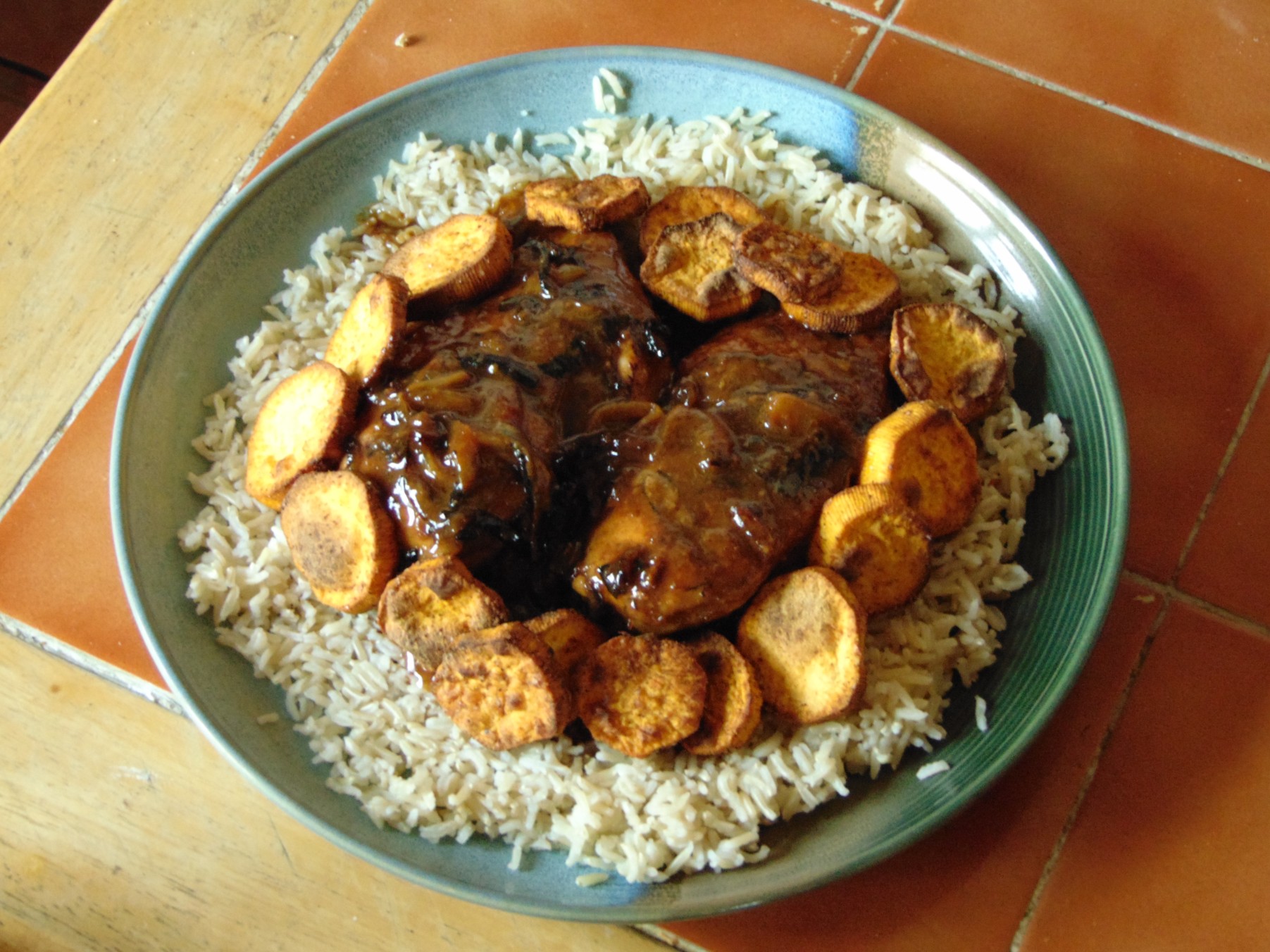 Silly presentation are my milieu.

So you end with with a sweet, salty dish that really is a mixture of various kinds of sweet, the scorched honey, softened by the coconut milk’s fattiness, the sweet potatoes natural sweetness enhanced by the sweet seasoning and the natural sweetness of slightly caramelised onions. None of it cloying or too sickly, just a lovely duality of sweet and salt fighting it out on your taste-buds, with tender, moist chicken and fluffy, light rice. Now, I don’t put this up often, but if you ever want to say thank you by buying Dearest Darling Jack a virtual Coffee, you can do so here or via Paypal directly here, if you already have then thank you, I’m extremely grateful. Don’t ever feel the need to do more than you can, Dear Reader, I just put it out there because in-spite of the light tone I do put a lot of effort and work into the site. I’m not here to make money, I probably couldn’t even if I tried, though it may be possible if I were to restrict access to recipes and I swear I will never do that. Just remember that a like, share, comment, anything that promotes the site or engages with it helps these recipes spread, which in turn gets them to more Dear Readers who may need them. See? By putting up with me you help people, no need to thank me. Heh. Until later, Dear Reader.