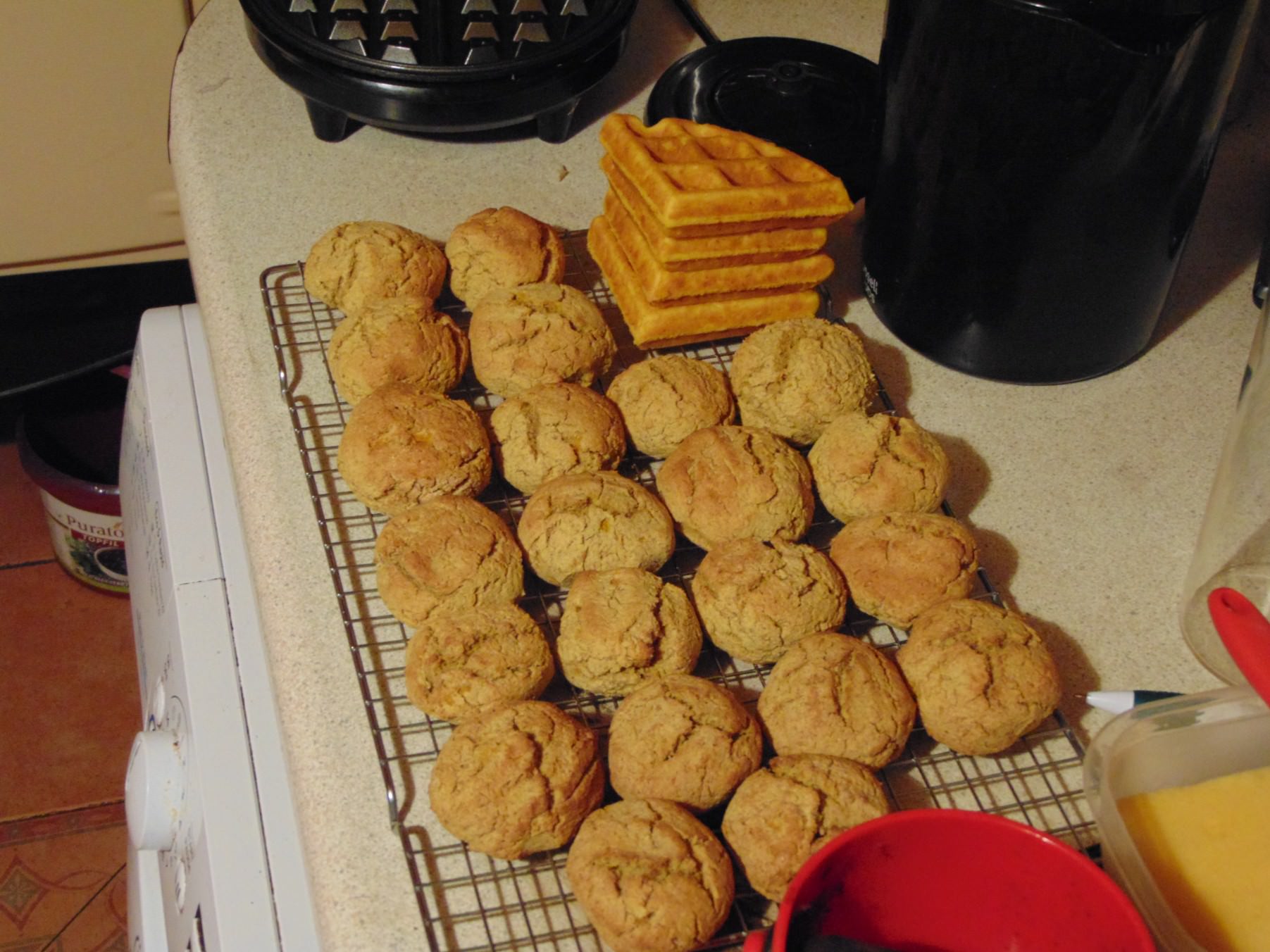 The Venn diagram of “What Do You Eat?” and “How Did You Lose The Weight?” is a circle. 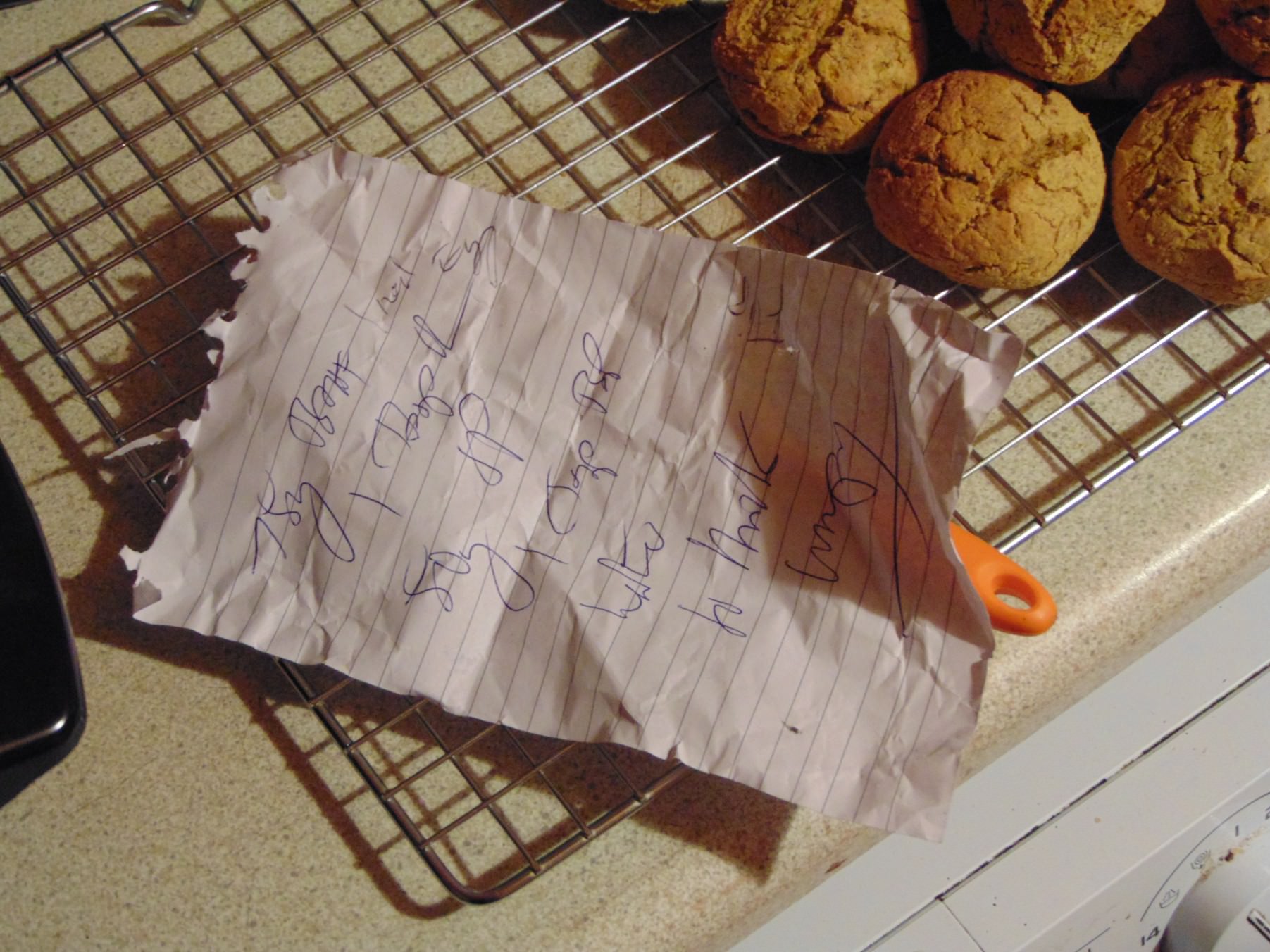 Well, this is surprising to us both, Dear Reader, I had left over squash puree, those Uchiki Kuri are a worthwhile buy, there’s little waste for the size. I found out they’re grown in poly-tunnels, which makes sense after the disappointing sweet dumpling, sweet, but not bountiful. I’ll just have to strike it rich or stick to bush type squashes. What was I supposed to be talking about? Oh, waffles, yeah, I do tend to waffle on, I just…hmm? Heh. I was talking with a Dear Reader, Joëlle, who, like many of you puts up with Dearest Darling Jack, and we were lamenting the dryness caused by rice flour. Now I have had experience baking with rice flour and with Pureed vegetables and fruit, thanks to a recipe from Cooking Without Gluten, that taught me more than the entirety of most blogs have, which in time became my recipe here, sources are important, as is gratitude. So, rice flour is pretty awful. Though it is great for flat recipes like waffles, I have tried out some purees and waffles to no success, but today I managed to hit the right ratios. What happens was really a surprise, the puree took away a lot of he inherent dryness, and the waffles themselves managed to crisp and firm up after cooling, it’s usually the disappointing reverse. 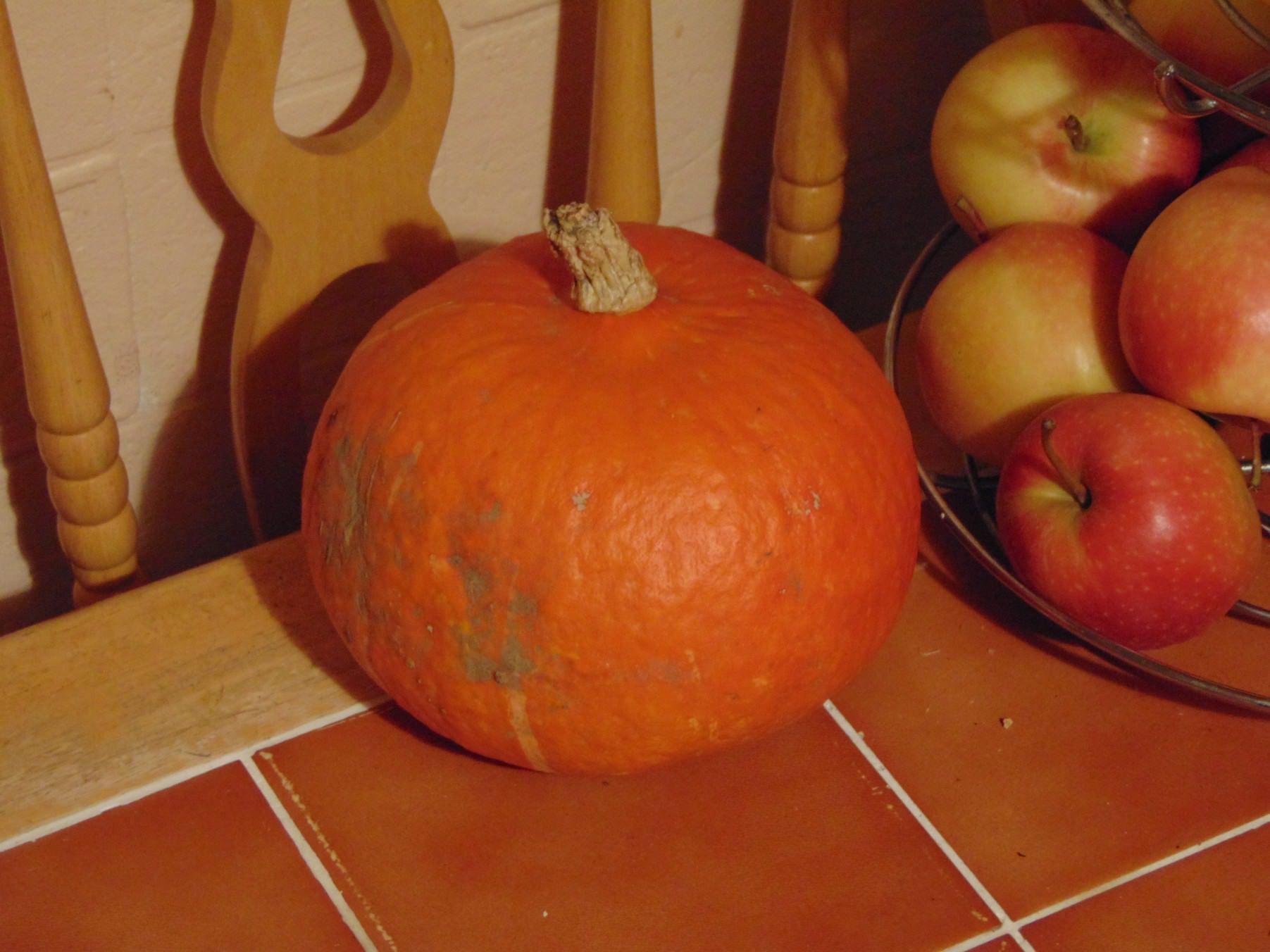 You shall be curry. The buns are here and the bread here. 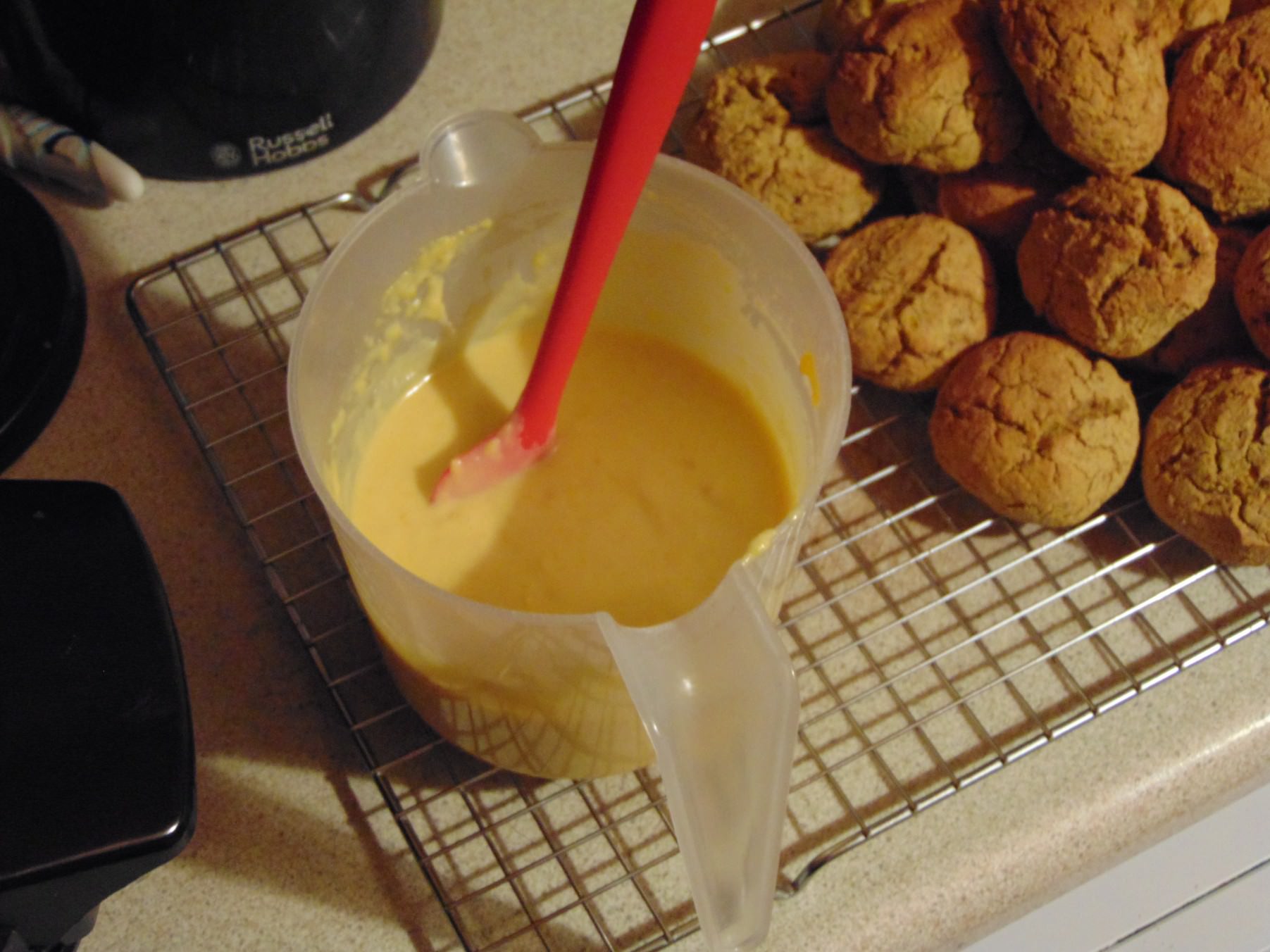 Rice flour batter looks velvety and is actually just lumpy at the best of times. 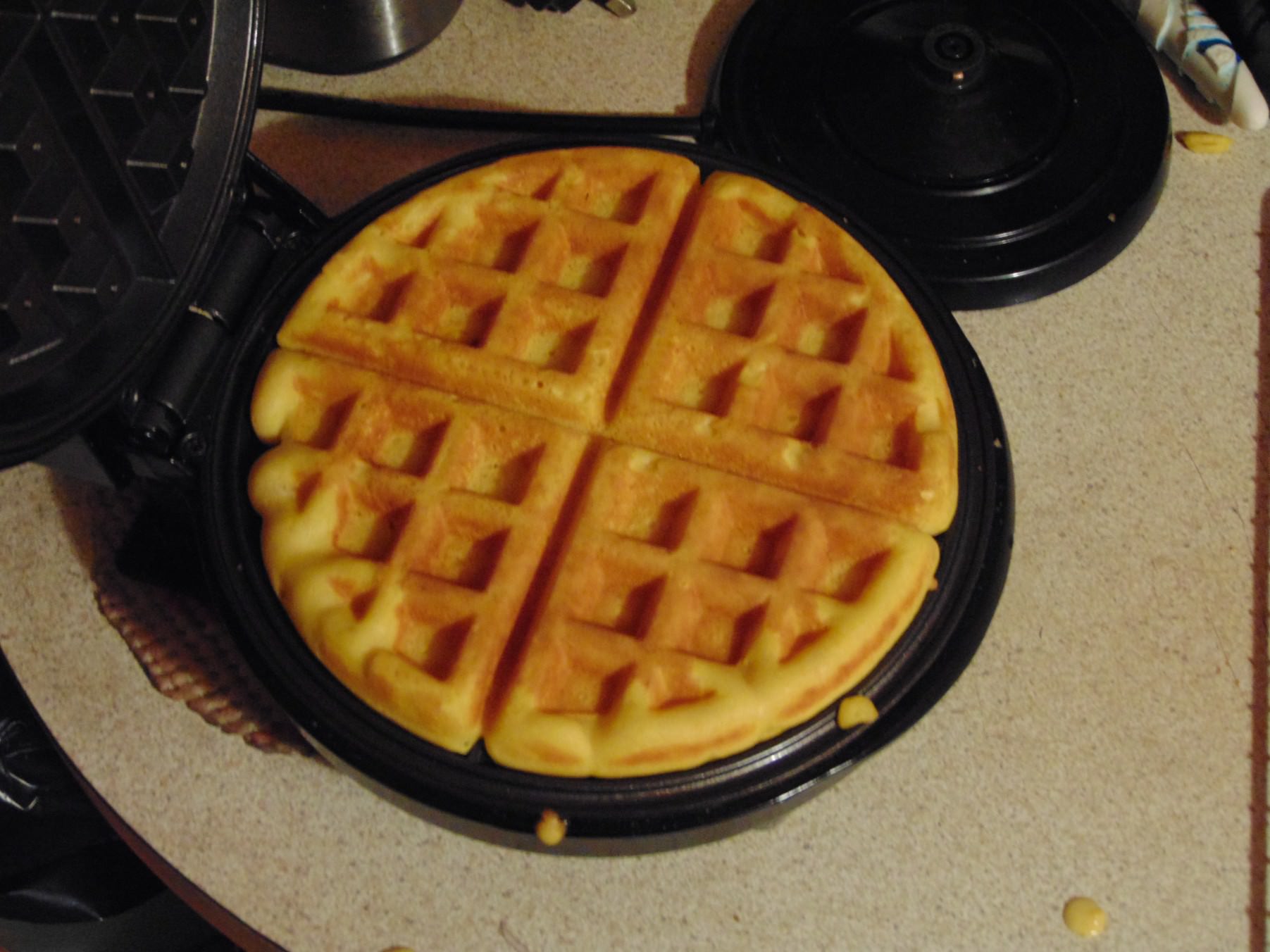 You can just see the outer crust being slight less done, hence the flip. 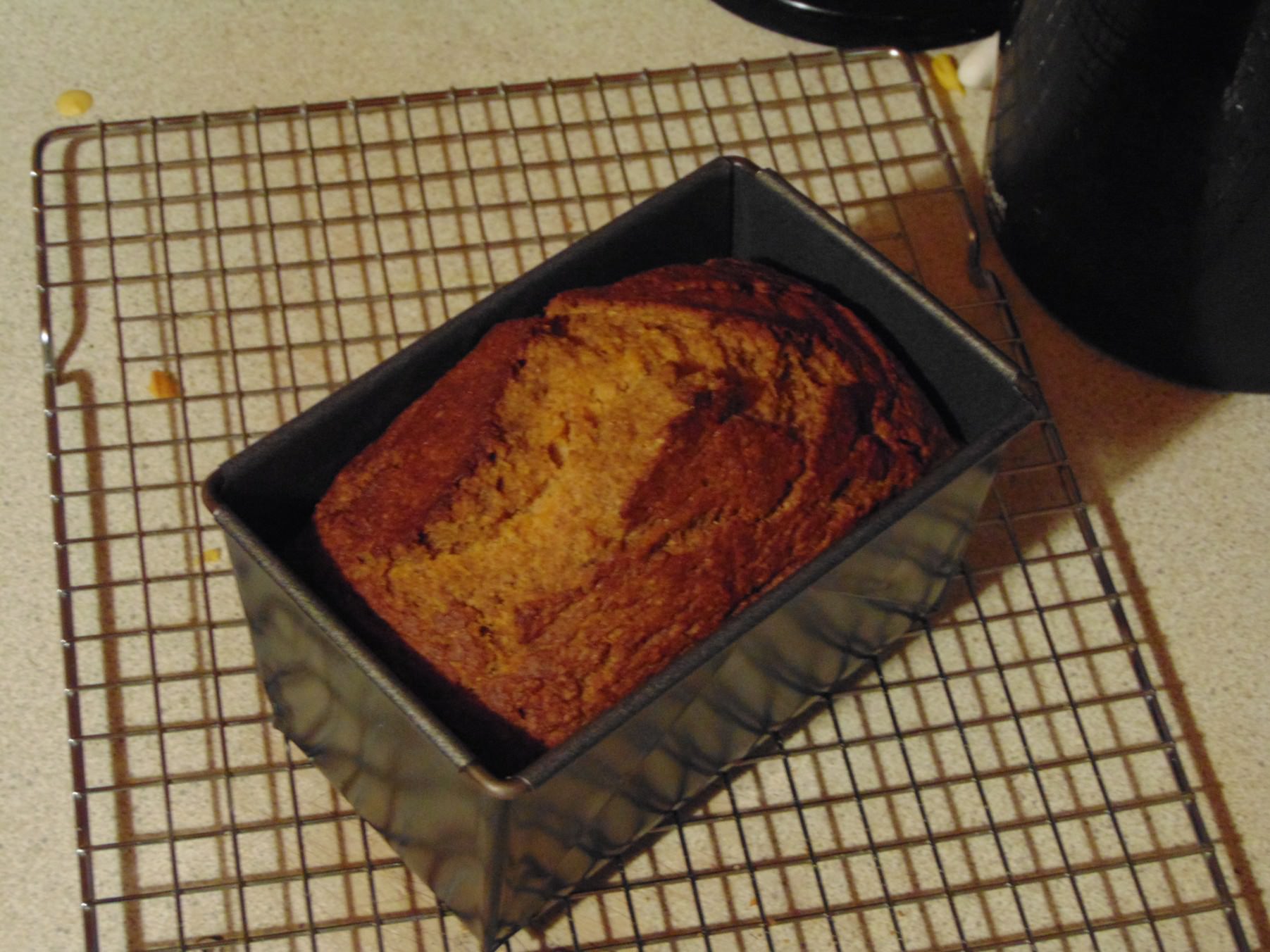 That’s me fed for a while.

So, soft, savoury, because I swear sugar is detrimental to good free-from waffles and I’m using less and less sugar these days, waffles that are really just made with junk and easy to hand ingredients. Sometimes you get lucky, Dear Reader, this should work with any moist pureed vegetable, but you’ll have to experiment, I have enough for a while. In truth, Dear Reader, I’m not sure that I ever really sought to become a food blogger, I just wanted to share what I had learned and what I had to do to accomplish all that I have. If I’m honest at times the blog was a danger to my diet as sugary sweet recipes are the most common free-from ones to be found. Cake was not the curative I needed. You can tend to seek recipes that will please your readership and the most likely candidates are going to be sweet rather than savoury. Once I stopped chasing this ambiguous goal of success I freed myself to really learn all that I could, not that I’m not glad that I’ve challenged myself in various ways over the years, my numerous forays into vegan baking and egg replacement have been a valuable asset, but if you keep making sweets you will fall and no one will be there to pick you up. No matter how great a blogger I could be, not that that’d been a possibility, I know myself and a viral star I will never be, so I switched gears and focused on my health, whatever that entailed would be shared here and I would no longer look for recipes for you, but rather recipes for continued health, popularity be damned. And, well, nothing much changed, the blog’s stats continue to rise each year and there is a lot of support, which I’m grateful for. What I’m getting at is that there’s more than one way to be a food blogger and there are more recipes than you’ll ever know. The post is heavy, but the waffles are light. I’ll be back again, Dear Reader. Take care.

Makes 4 Waffles. Can be frozen.

3. Add enough Batter to warmed Waffle Iron to fill the plates thinly, spreading as necessary, close the iron and cook for 7-10 minutes until waffles are golden brown and the bottom is cooked. Remove with a rubber spatula and flip over, leave for a further two minutes to cook the bottom. Remove and let cool for a few minutes, Waffles will crisp up slightly more as they cool.