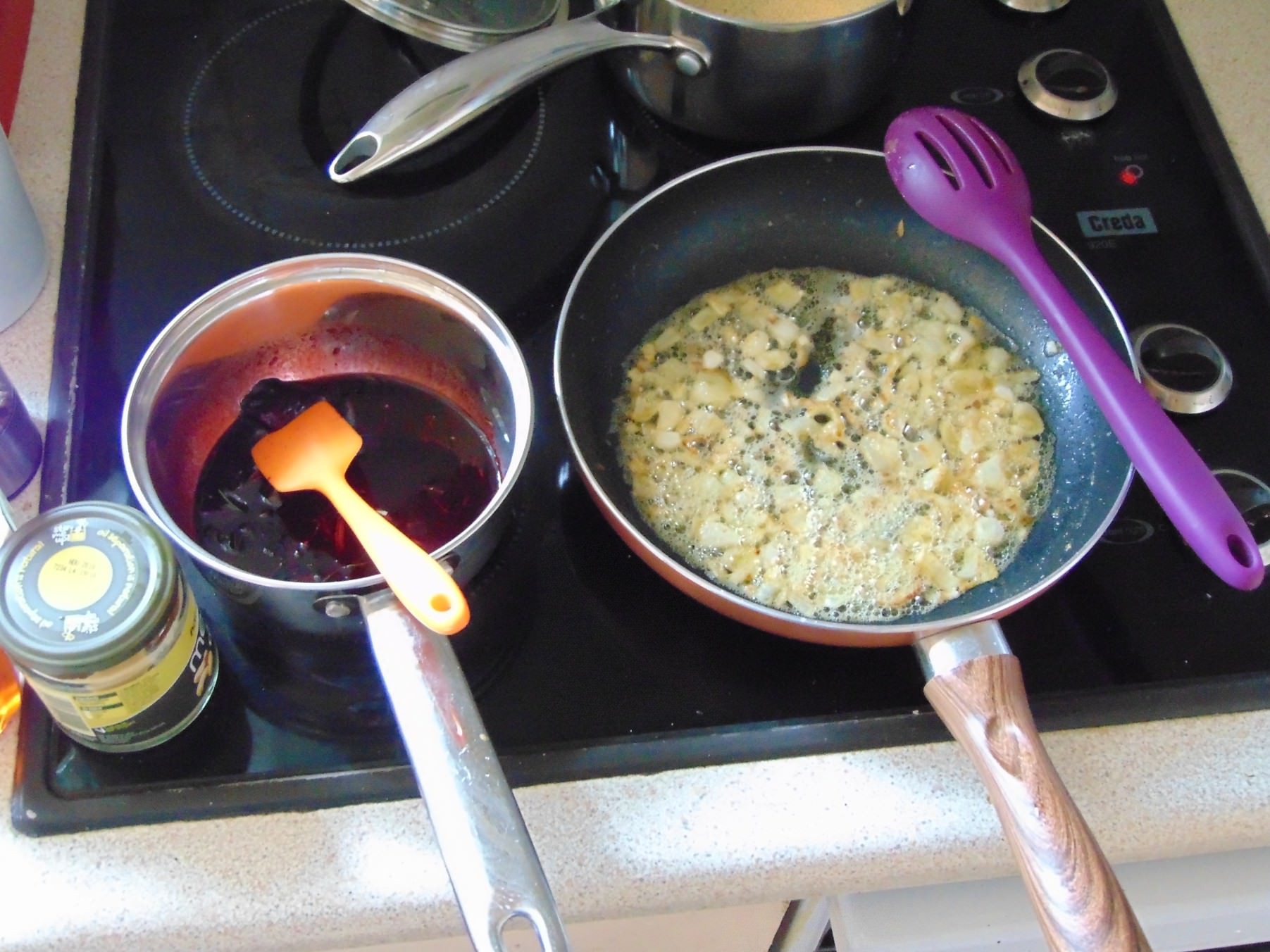 I just put everything I using near to hand.

Going for a little longer post this time, Dear Reader. Thursdays and Sundays are the days I do my most intensive cooking, depending on my mood they can get very elaborate, they’re almost always followed by relatively simple and plain dinners so it all balances. I don’t think anyone can really conceive of all the work it took to get where I am now. It’s what, hopefully, makes sharing all these tweaks and spontaneous variations worthwhile, Dear Reader, you never know who you’ll reach. So I mentioned before that I had some blackberry juice frozen, cranberry too, same idea, and thanks to a few recipes, Raspberry Sauce and Strawberry Basil, I know that meat and fruit is a very special combination. Coupled with the nut butter amaranth, well, it’s just very special. 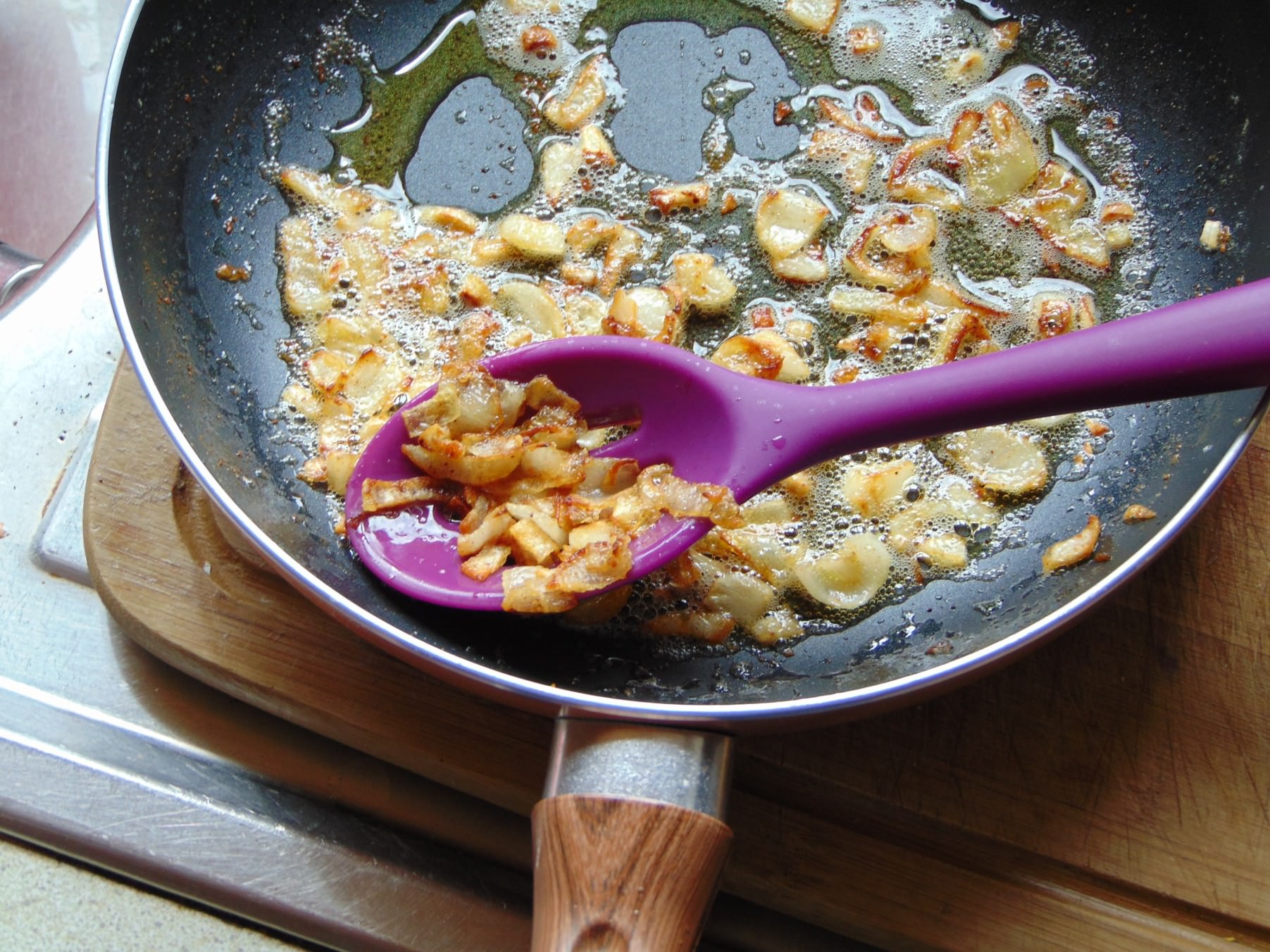 I wouldn’t know where to begin posing photos.

So the sauce is a simple reduction. Again, not exact, but close enough, 100ml of blackberry juice, unsweetened, a dollop of blackberry jelly, like a tablespoon’s worth, a sprig or two of rosemary, stripped, no need to chop, salt and pepper. I tossed that in a pot and then went to caramelise shallots, I was inspired, order has no place here. I used all butter, when they turned brown, not quite caramelised, but close enough to bring out the sweetness and increase the natural taste’s prominence, I threw those, sans the butter, reserved for steak, into the sauce pot. Just boil it until it reduces, I could’ve taken it further, but I like sauce, swimming in sauce isn’t ascetically pleasing, but it sure is delicious. 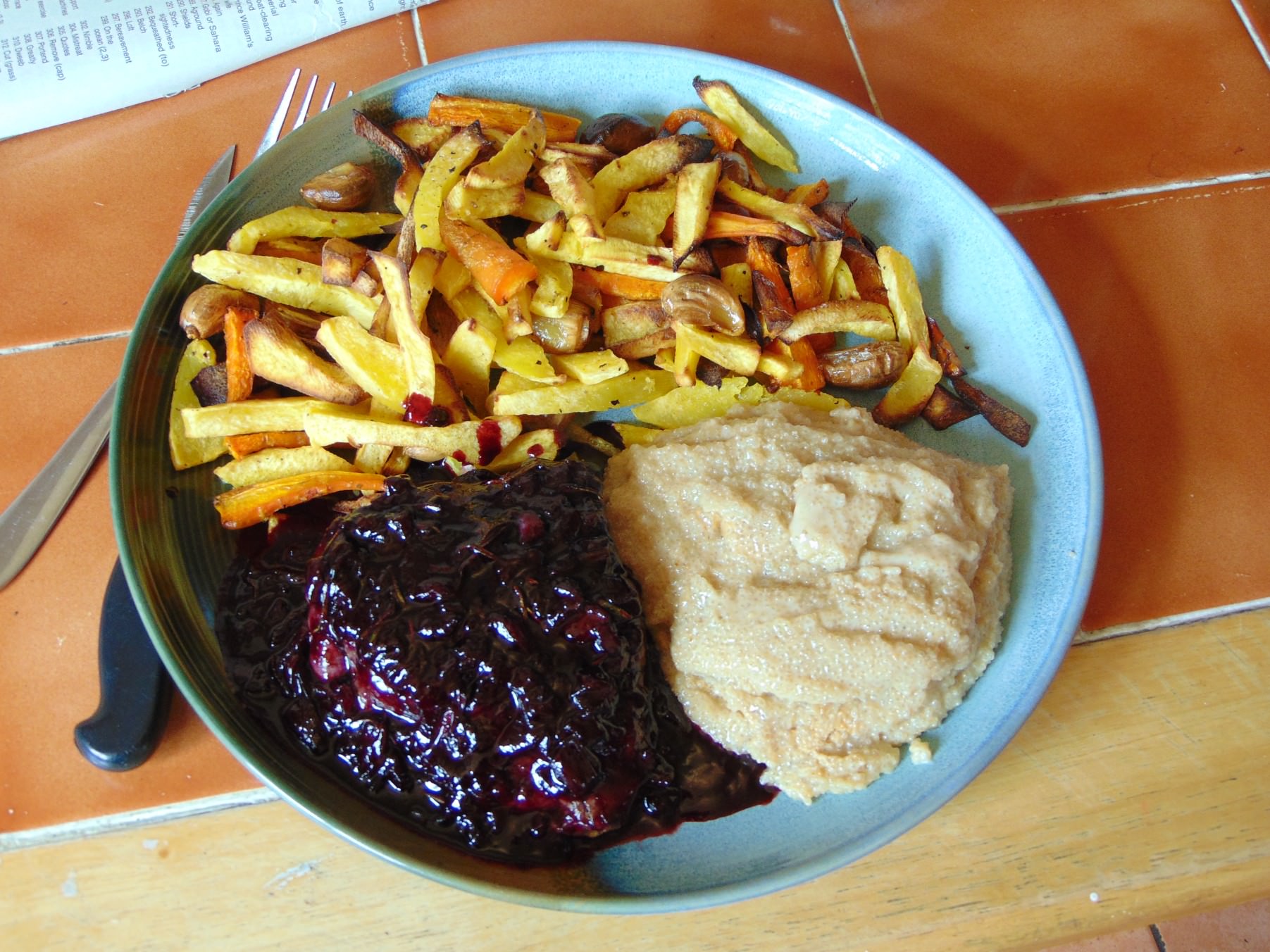 So much sauce, so, so tasty.

The amaranth, is the version with nut butter, cashew in this case, the link is above with recipe, I left unsweetened, but salted. There was enough sweetness, I use either maple syrup or honey when I’m using it as normal. Or as normal as my recipes ever are, Dear Reader. The harlequin squash chips, with carrot and roasted whole cloves of garlic, peeled, think gooey and crunchy, are just seasoned with salt and pepper, I use mixed peppercorns because they were there, I think the allspice in it also goes with savoury fruit sauces. I’m not that nuanced or sophisticated of palate. So, what you get is crispy vegetables, a creamy, nutty, naturally sweet thanks to the cashew, side and a steak, with a hint of shallot, slathered in a sweet, oniony rosemary rich sauce. I love rosemary and blackberry, I’d honestly consider making jelly with it for the Winter. So, that’s that, Dear Reader, a labour intensive dinner, but an enjoyable one and a meal that really let me celebrate the garden’s bounty. I hope you’re enjoying these posts, they’re useful for sharing what wouldn’t warrant claiming a new recipe’s creation, but useful enough to be shared. I’ll be back again later, Dear Reader, take care.