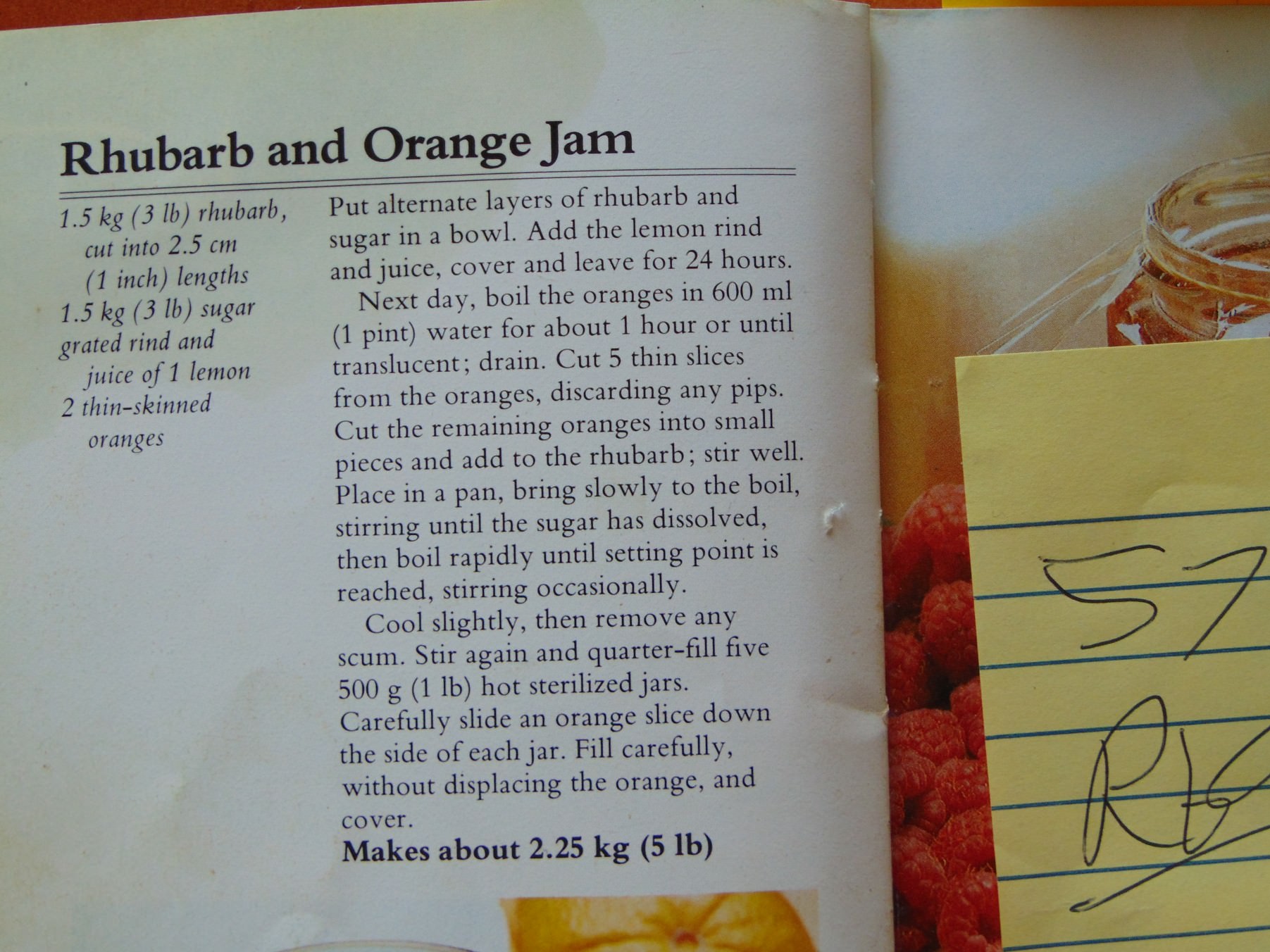 Recipe I adapted this from. 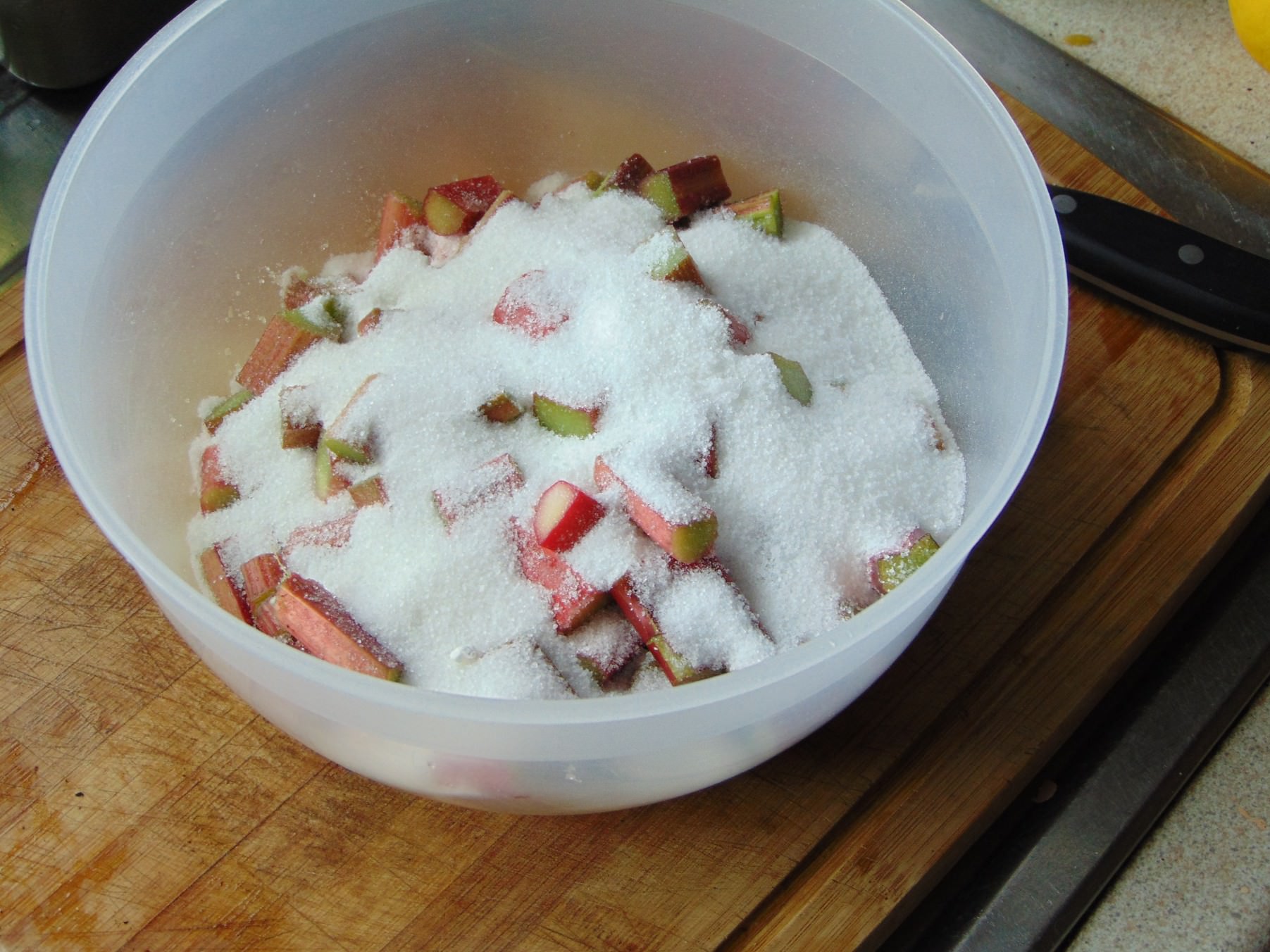 Every year I will make jam, Dear Reader, and every year I will fret over consistency. The reason for my anxiety is that I’m always confronted by the fact that most recipes refuse to divulge the consistency of the end result. Though it varies, a little help would be appreciated. The rule is that the more pectin the thicker the jam, if, like here, you’re using normal sugar and low pectin fruit, for the purpose of this recipe rhubarb is a fruit, the the set will be more of a wobbly nature. That’s just the result of the ingredients, there’s nothing wrong in a jam that hasn’t set hard. Some set too hard. Really too many recipe fail to give any indication of what to expect outside of a few carefully cultivated photos. I haven’t tested the jam’s texture yet, but I’ll update with that later. I can’t eat much, but I had a test before jarring and it has a strong acidity paired with a smack of sweetness. I know, I know, I’m doing what I said, but I’m being honest. I could show photos of jam mounded on the spoon when in reality it might just roll off. Recipes should not only teach you how to make something but also what you are going to make. 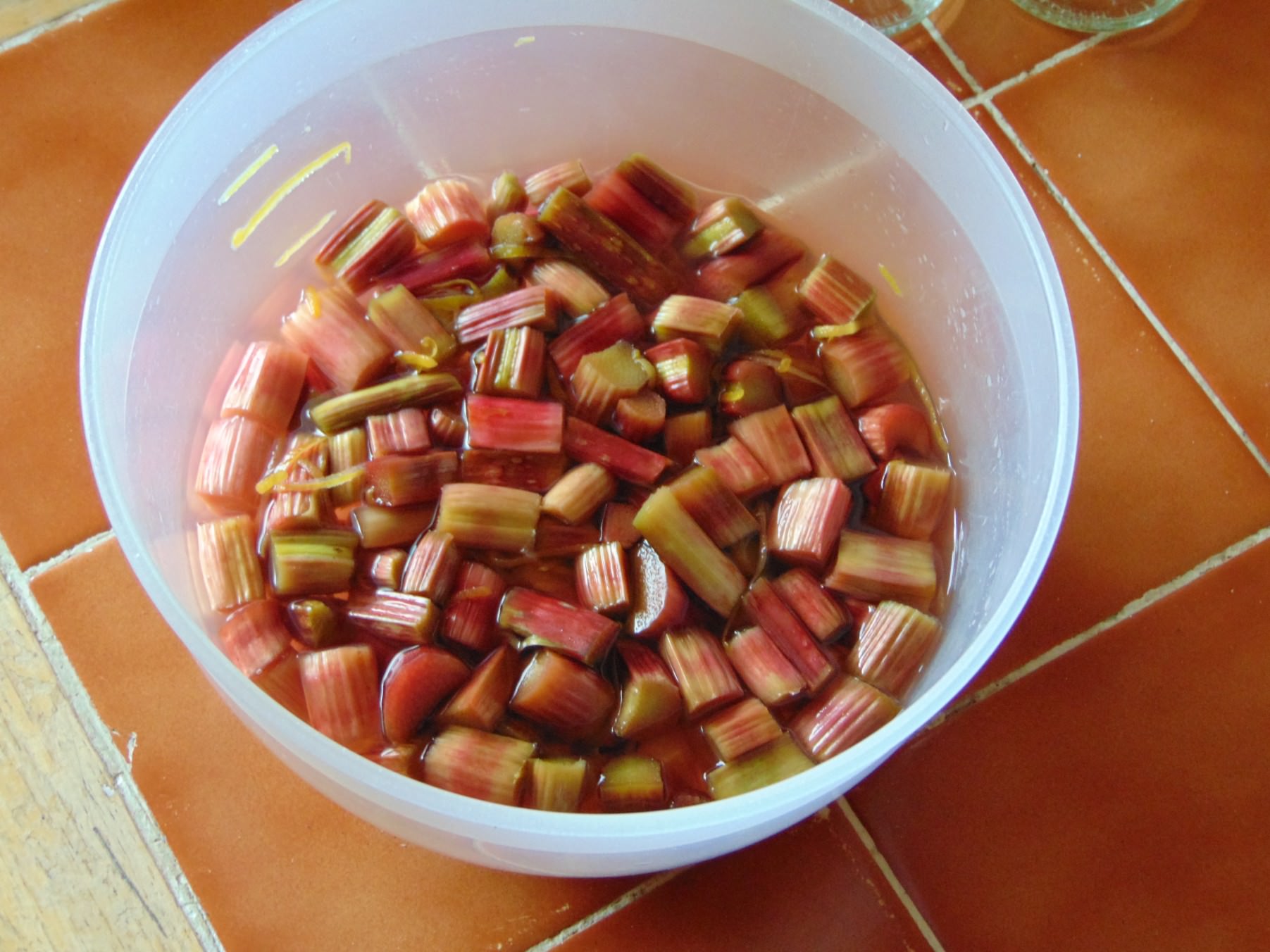 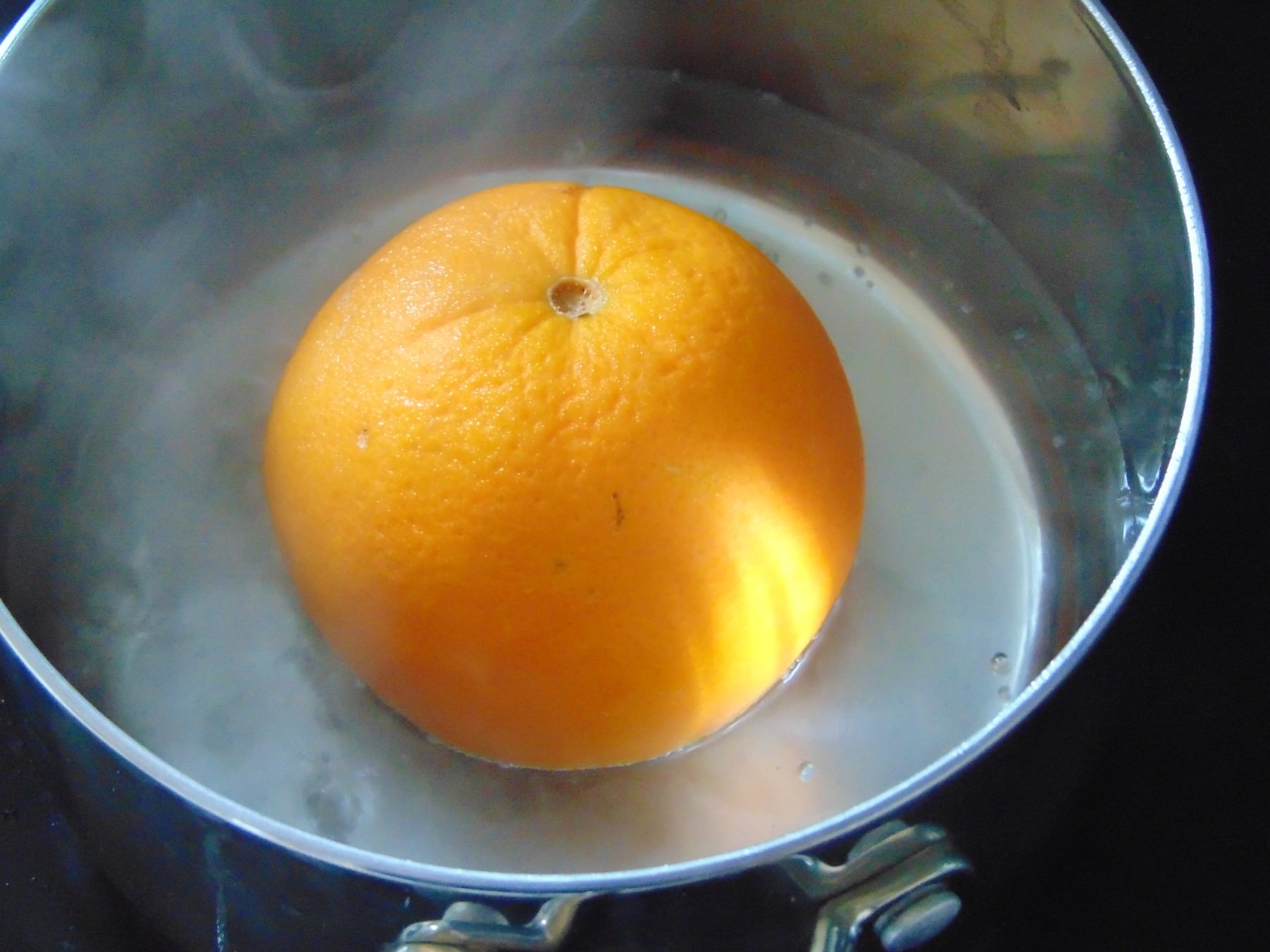 The second longest part of this. 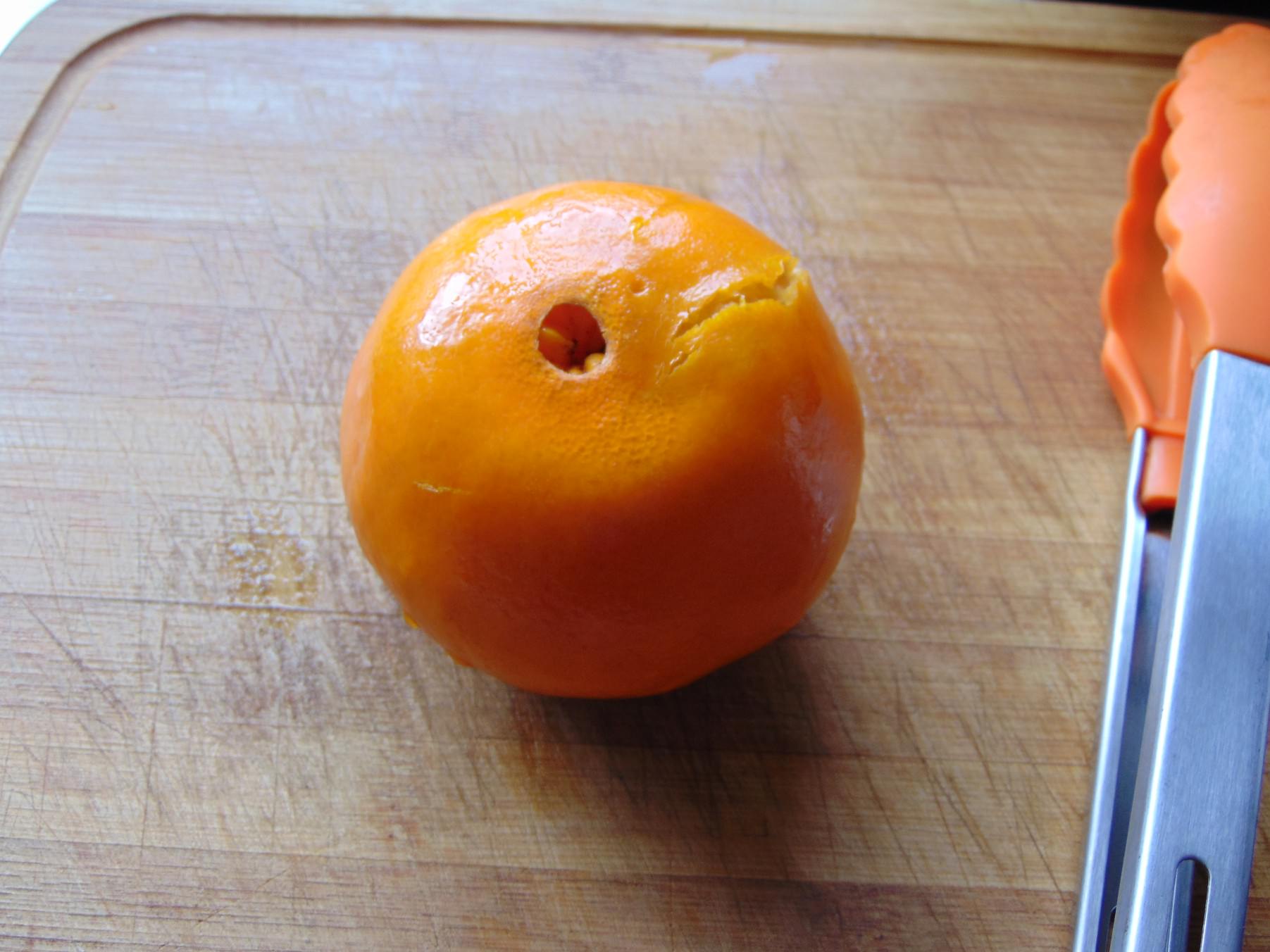 Boiled, steamed, whatever. One hot orange.

If the jam is in any way edible then it’s not a failure. Different jams have different applications and you’ll find people tend to think of them as all the same, it’s grating to tell someone that that savoury jelly is for meat, not toast or scones and have them gaze at you blankly. In making recipes like these you’ll learn a lot about different ingredients, but also our own perceptions of food and our biases. You’re all too often going to share something you’ve made and meet with someone who is absolutely sure that they know how it should actually be. Give them a light set jelly and they’ll tell you it should be thick. It’s enervating and discouraging. They’re comparable to a belligerent child who refuses to listen. Know that if you’re learning, getting better that you’re already in no need of people like that. Share the food you prepare with those who celebrate your accomplishments. Heavy for a jam recipe, I admit, Dear Reader, but important. 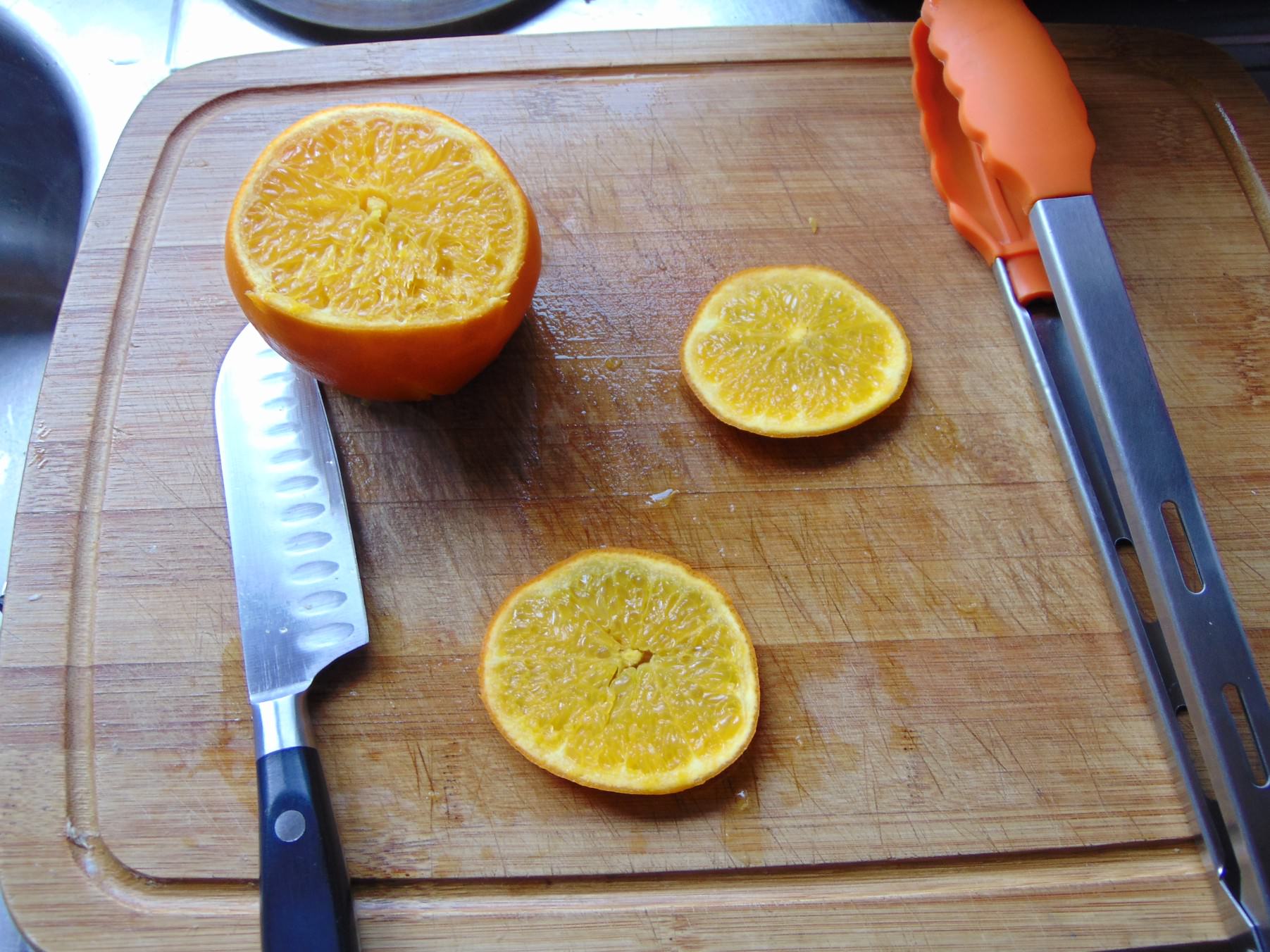 Try to get it as fresh as you can. Mine was difficult to cut part way as it was too soft. 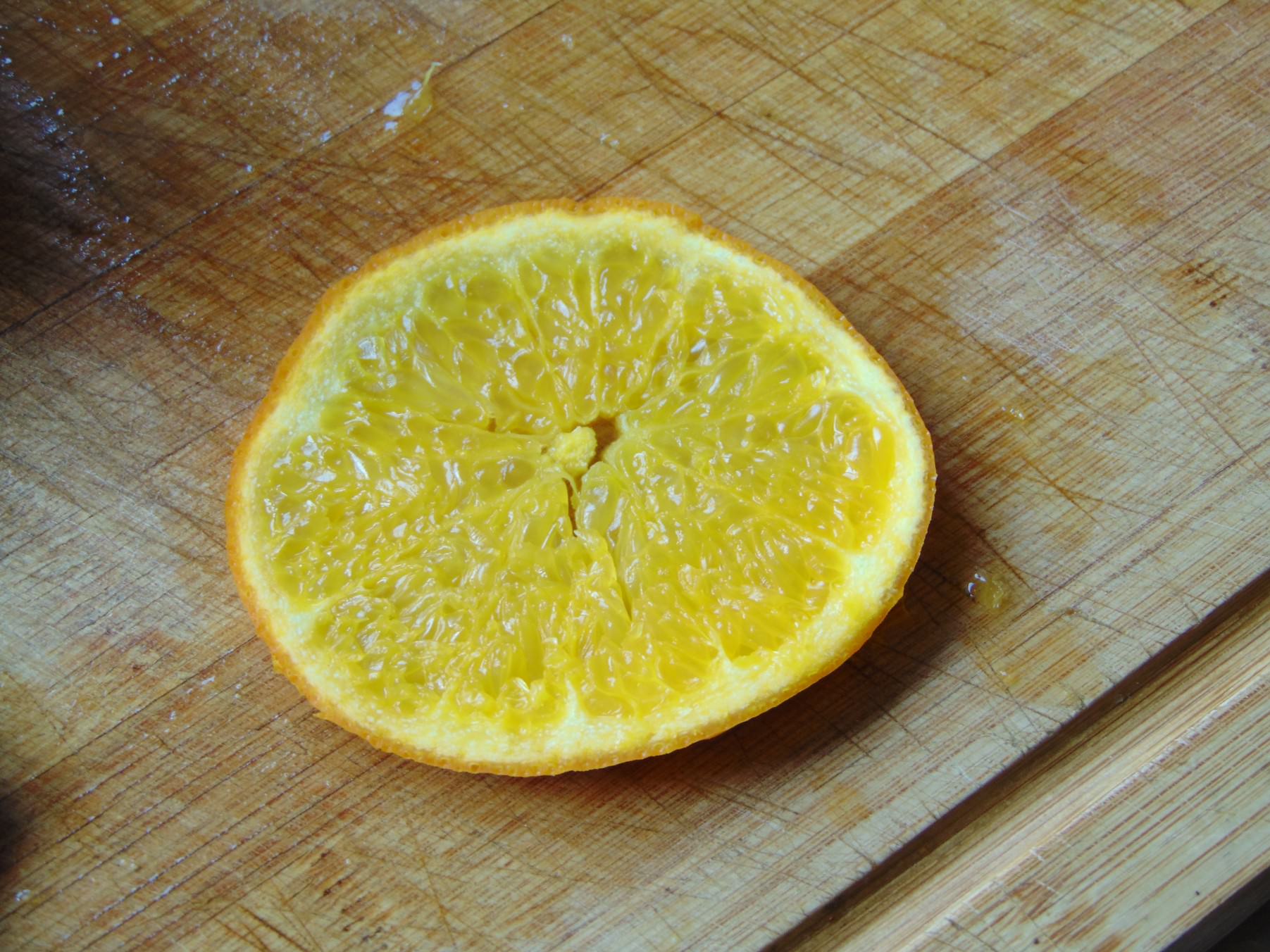 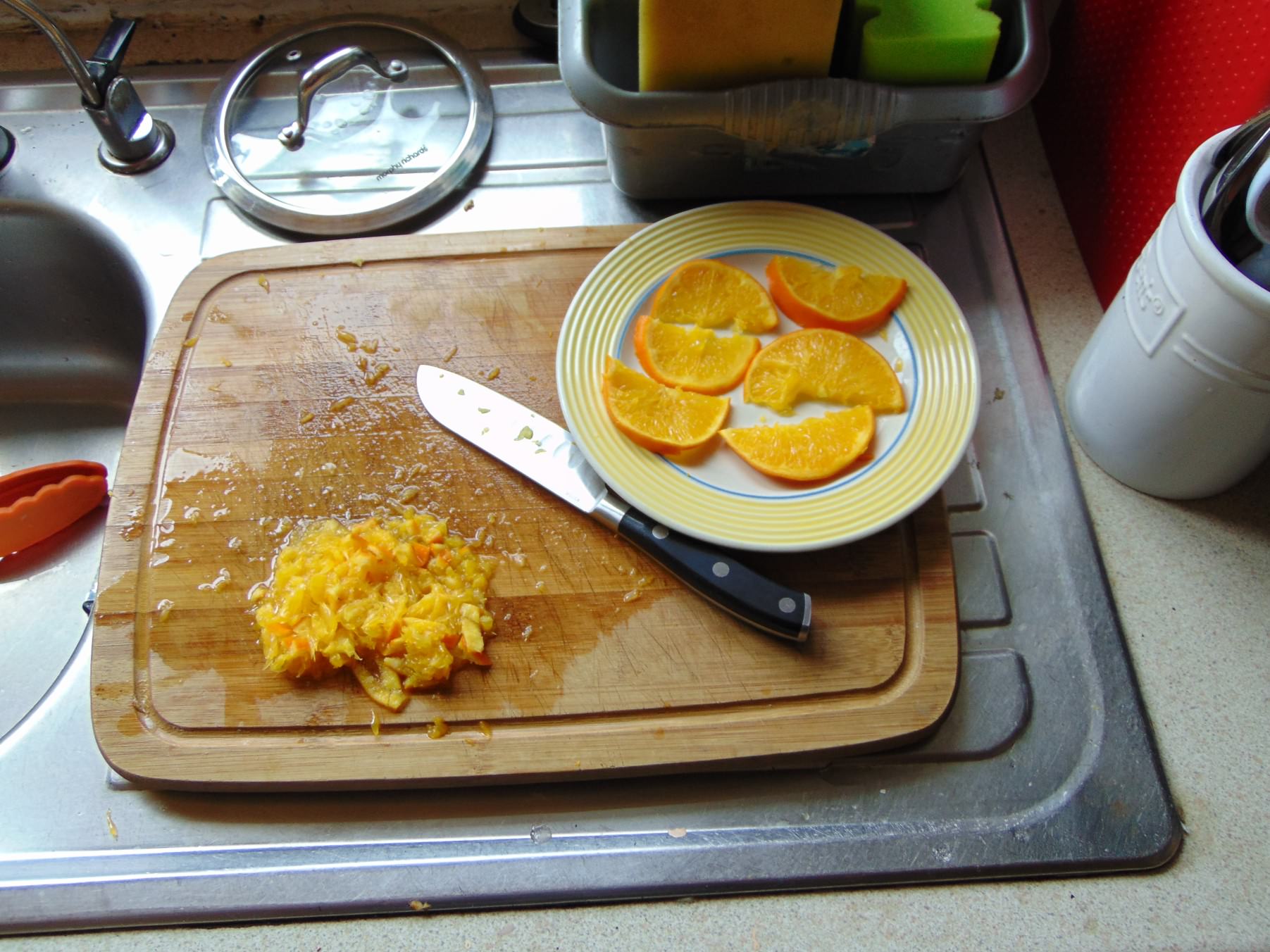 Small jars call for half slices. I used less than the whole orange.

This reminds me of the crab apple jelly, it has that wobbly set, at least so far. It may thicken more in the jars as it sits. The difference between a pectin added jam and this would be how hard you have to press a spoon into it. This will most likely be pierced with the lightest touch. The work here is boiling the orange, it gives a more elaborate look and does add greatly to the taste. As I say I didn’t use all the orange as it was very large, you have to go with your gut on recipes like these sometimes. The rest of the work is standard jam fare, prepare everything before you start, you don’t want jars getting too cold before adding the jam. Having the plates in the freezer early is a must. As you can see it has a thinner set, where pectin based jam will just set into a button when it hits the old plate, this rolls a little, but when you run a finger through it stays separated. Continuing to boil it will just spoil the jam, I’ve made that mistake before trying to get a firmer set. Accept the set, it’s better to have an edible jam, even if it’s practically a conserve. 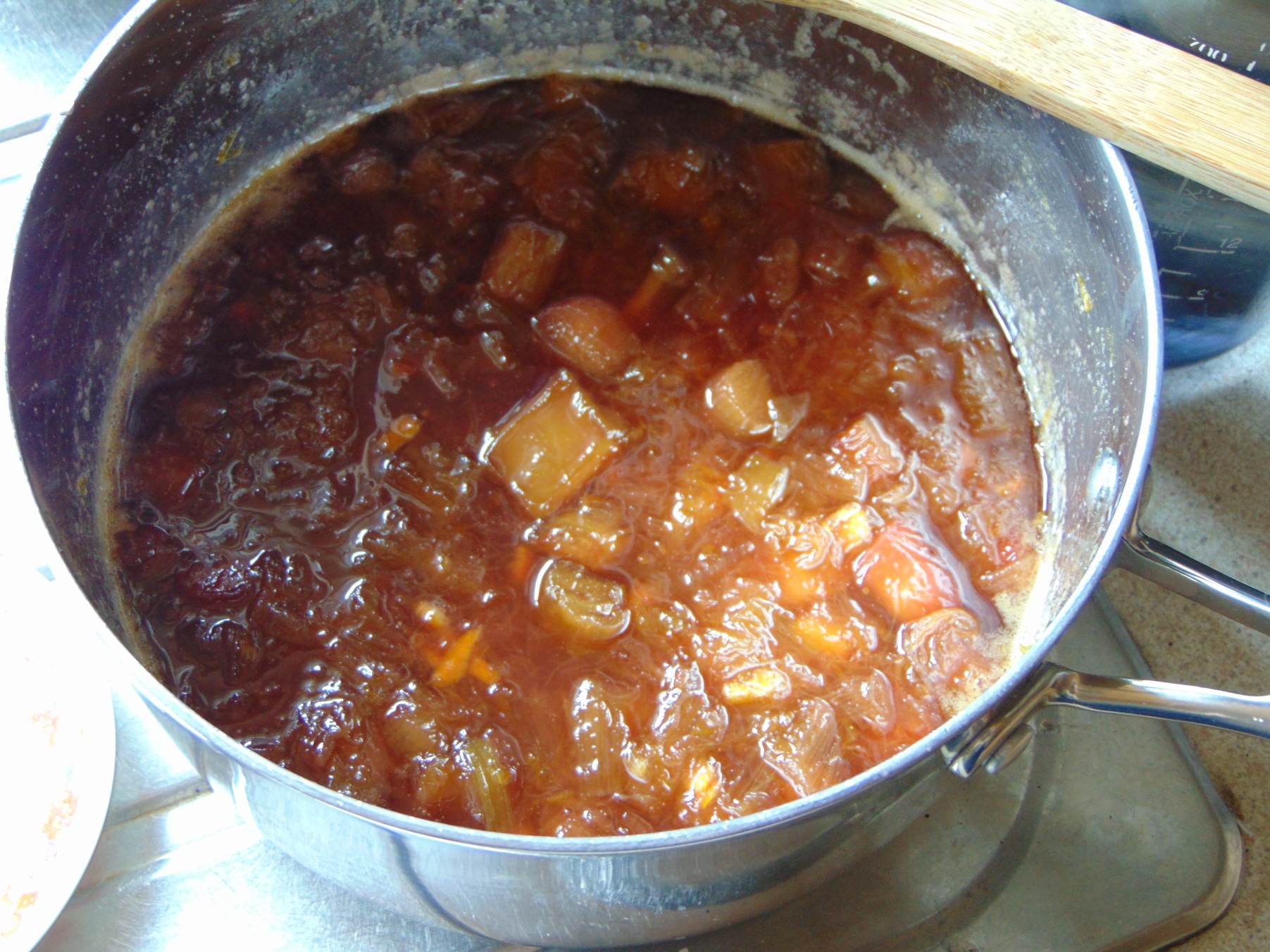 The rhubarb will soften quickly on the heat. 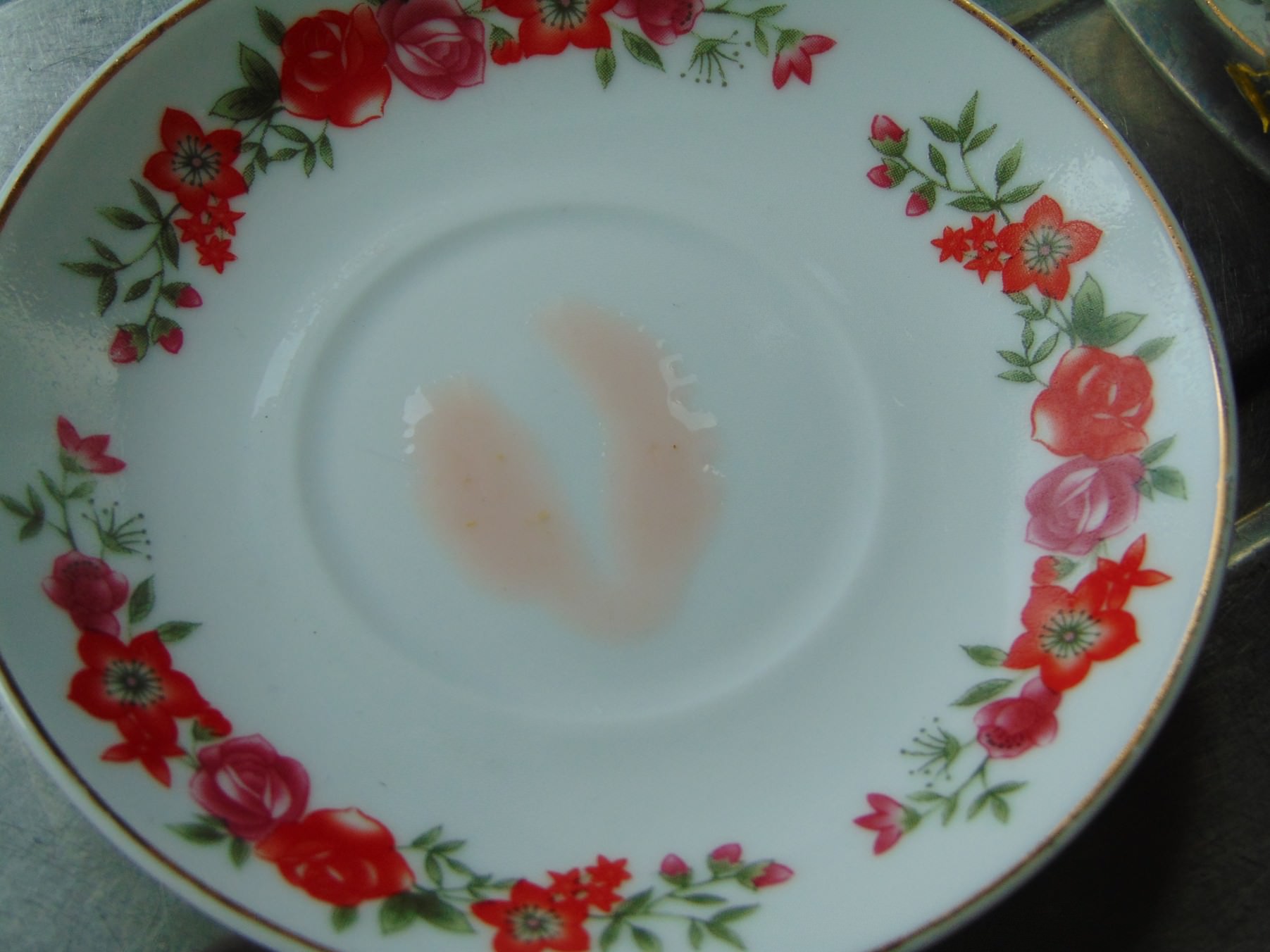 More syrupy as you can see. 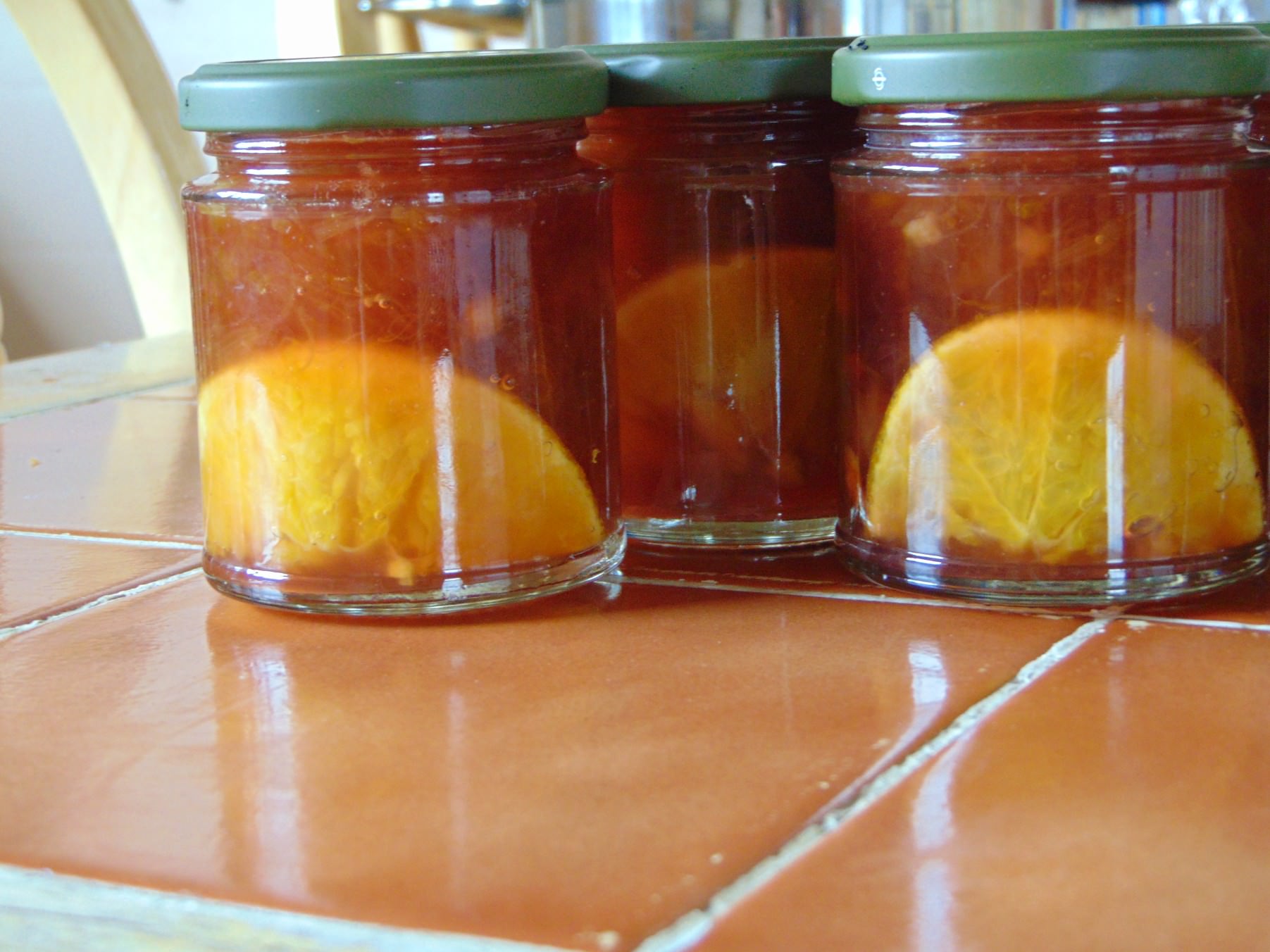 I have so many of these jars. They’re Meridian Nut Butter Jars for the curious. 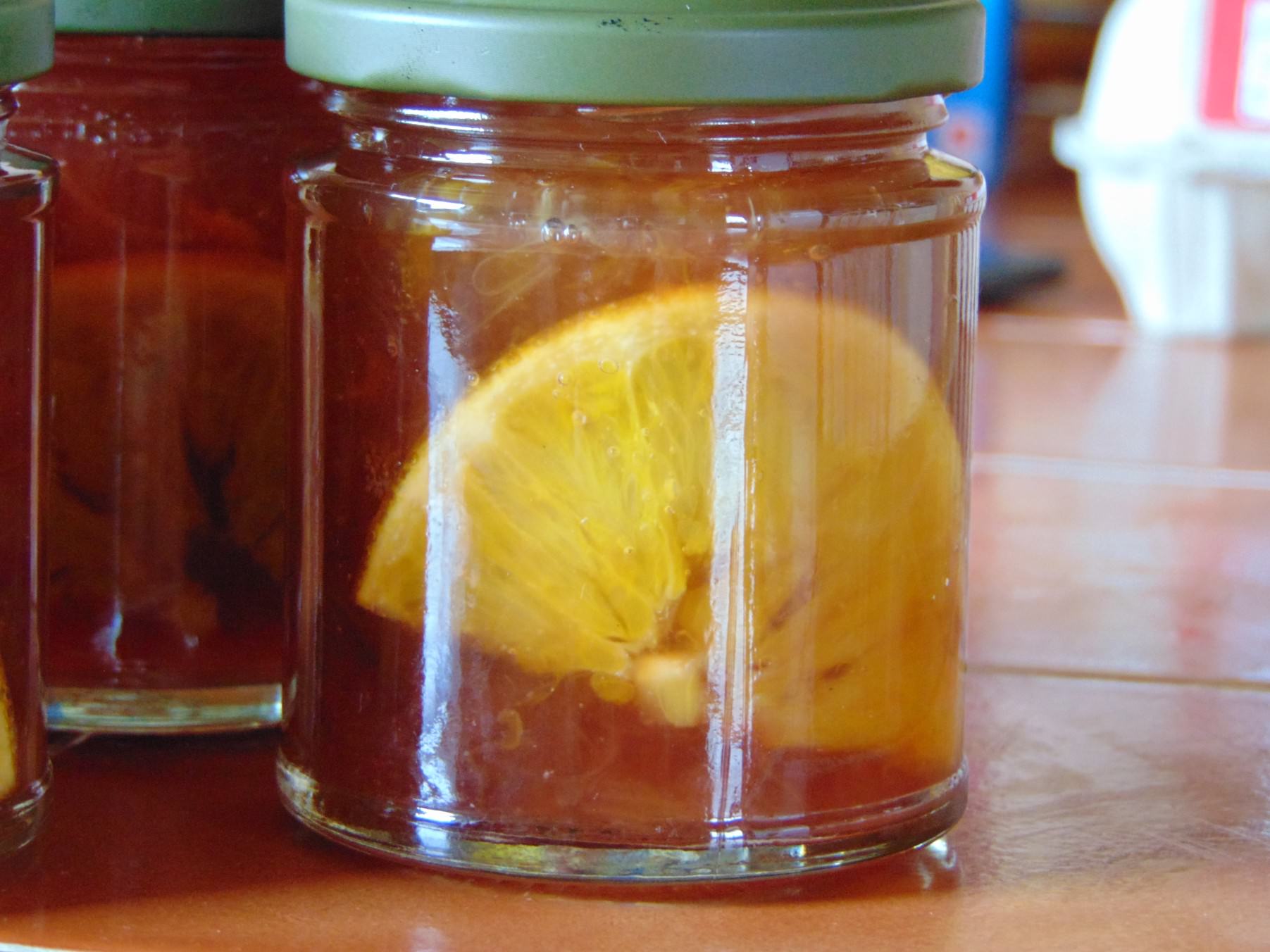 I admit, I really do like jam sugar, it’s just so convenient, but you can’t buy jams of varying consistency like you can make yourself. Most commercial jams are much of a muchness. There’s something special about walking into the garden and grabbing some fruit or herbs and making something that will last years, well past the growing season. I’ll update this with a report and photos on the set, later, not sure when. For now I go back to the sugar withdrawals, which are surprisingly rough. I suppose that consistent amounts every day tend to add up in the long-run, a lesson for us all. See you later, Dear Reader. 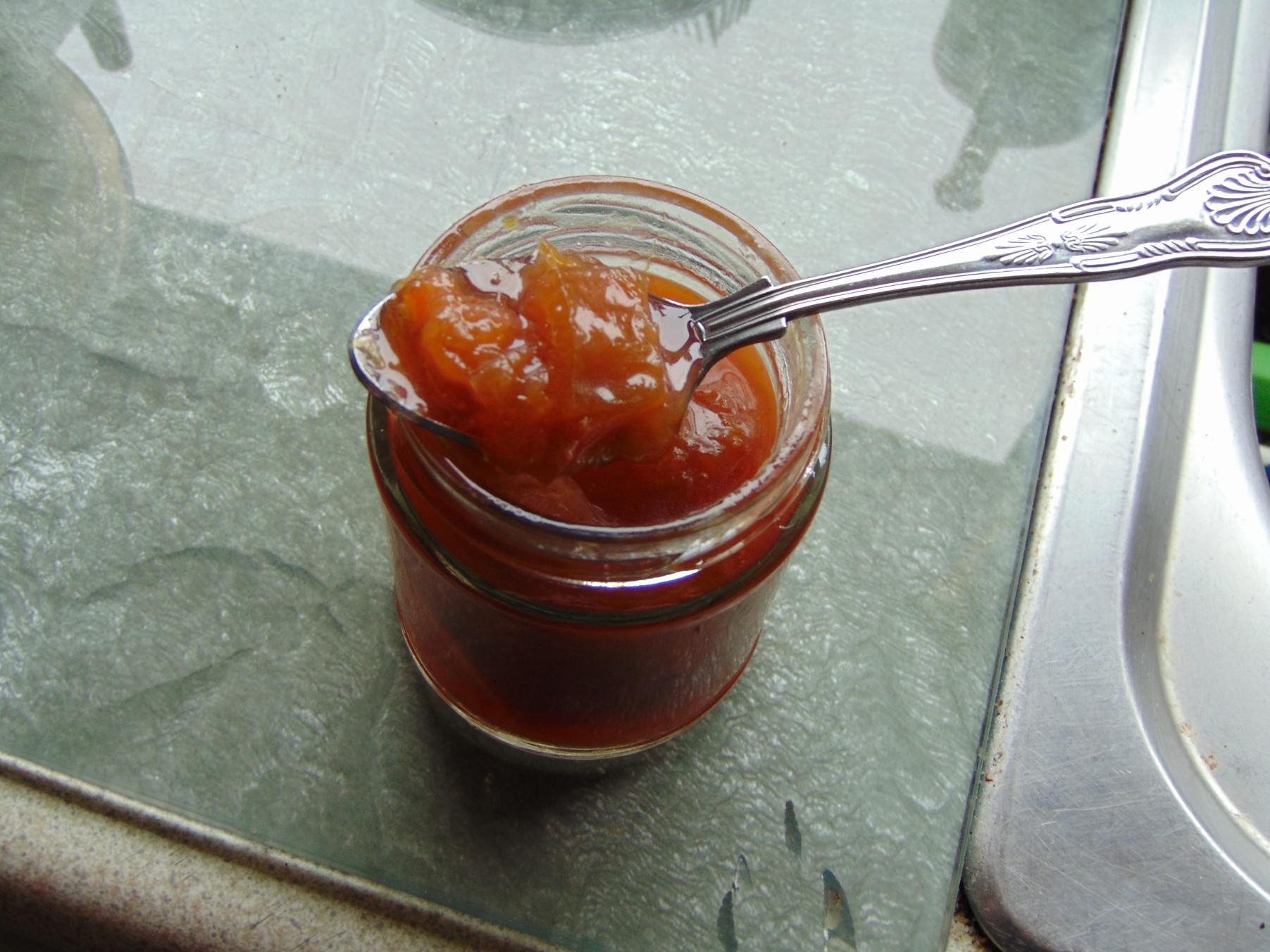 Me: This could also years unopened. Also me: See above.

See? Jack never forgets a promise. I opened the jam and called its consistency correctly. It’s soft chunks of melting rhubarb in a clinging thick syrup all melded together, but still distinct in its individual textures. I can’t eat much, but I chanced a spoon’s worth. It’s a punch of fresh orange sharpness followed by a wave of sweetness. This really does need the orange after all, it helps bring it all together. Once you pop it into he fridge it’ll thicken further. As to applications, well, with ice-cream would be a must, it’s so strong it would compliment vanilla perfectly without muting any of its acidic overtones. So, there it is. I’ll have more jams as the year progresses, with herbs included again. The lime basil was large enough to sneak a leaf and it does tastes of lime, but without the sourness. Going to be an interesting year for recipes. See you later, Dear Reader.

1. Place a layer of Rhubarb in a glass bowl, then a layer of sugar, repeat until everything has been used. Pour over the Lemon Juice and add the Grated Rind then let sit, covered with a dishcloth for 24 hours.

2. Place a small plate in the Freezer.

3. Add the Orange to a small pot with 300ml Water bring to a gentle boil and let boil for 1/2 an hour or until Orange is tender. Don’t let the water boil out. When ready drain and slice thin rounds from the orange, then chop up the remaining orange and add to the Rhubarb and Sugar.

4. Add Fruit and Sugar to a large bottomed pot, filling no more than 1/3 full. Cook uncovered on a low heat, do not let simmer, until Sugar has dissolved. Run spoon down the bottom of the pot to see if any Sugar crystals remain.

5. Add Butter to pot and bring to a rolling boil. Boil for 5-7 minutes, stirring as needed, then remove from heat and remove the plate from the freezer. Drop a little of the Jam onto the plate and if it it stays divided when a finger is run down he middle then the Jam is ready. If not boil again for another minute and retest until Jam consistency is right. Let cool a few minutes before pouring into Jars.

7. Wet Clean Jars and heat in the microwave for one to two minutes until dry. While they sterilise soak the lids in boiling water for a minute or two. Add a slice of Orange to he side of each Jar and then pour the warm Jam into the prepared Jars then screw on lids and let rest at room temperature overnight.

8. Store in a cool dark place and refrigerate once opened.

11 thoughts on “Rhubarb and Orange Jam”