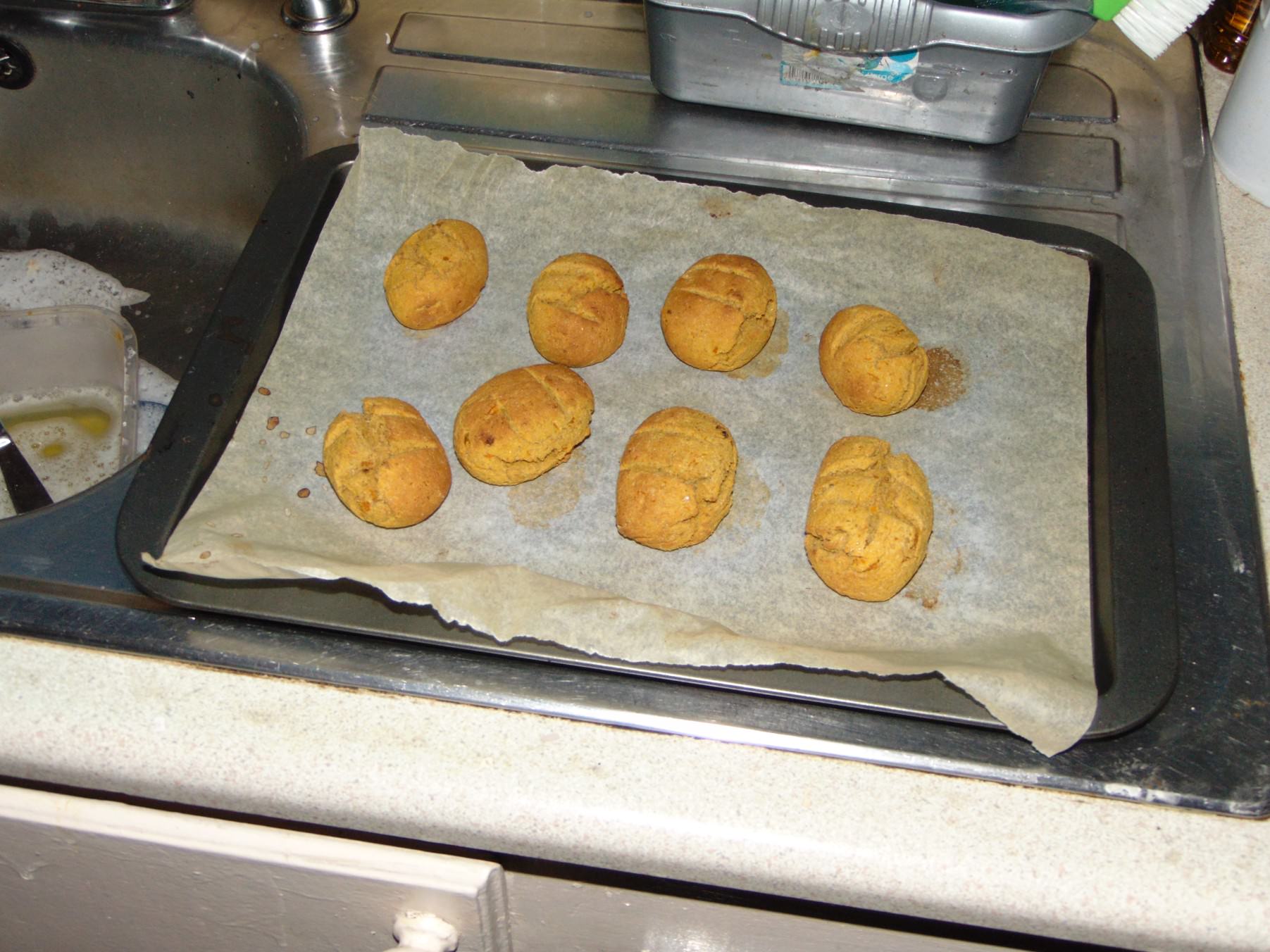 Made here with Uchiki Kuri and Golden Flaxseed.

Update 16 September 2016: They freeze perfectly and taste even better the second day.

I feel as if I’m apprenticing at Cooking Without Gluten. I’ve been trying raw apple in multiple recipes recently. A few failures, but a fair few successes. I often think it’s important to credit people even if it’s just a tip, technique or just inspiration. I’m taking the Blended Raw Apple ball and running with it, but I am grateful for the original idea. Funnily this recipe is similar to these rolls whereas they’re actually based on these Buckwheat Scones. I think when you’re working with multiple allergies/intolerances there’s always going to be some overlap and similarities between numerous recipes, especially as the ingredient pool shrinks. As I say these are similar to the rolls, I did get the idea for the raw apple from the same, but this was partly my own tinkerings too. I used flax as is seen in the the flax variation, a trial for a lighter scone, an unsuccessful one, but a decent variation.

So, what was I aiming at here? Well, dear reader, I’d be remiss if I didn’t call you that, a lighter buckwheat scone. And did I succeed? Need you ask? For do I not have a new recipe for a light, delicious scone? I’m calling it a scone as it’s what it most resembles. Now, how did I get here? Well, a time-line would read as follows:

So, it’s partly me knowing a bit about what might happen, hence the flaxseed, a great liquid absorber, and partly luck. As is all baking in some ways. This recipe is oil-free, but not sugar-free. I think it could be diary free, I don’t see the milk making much of an impact. Do tell me if you try it. I will be trying this with vegetable purées in time, hence the title being Purée rather than just apple. I like a very basic, plain recipe first then I go wild with variations and tweaks. So, I’ll get to the taste and texture, but I just want to say as much as I might be making this look flukey, it was based on a fair bit of accumulated knowledge. What I’m saying is don’t be afraid to try various recipes, you never know what you’ll learn.

What I’ve managed to do here is threefold, firstly: They’re lighter! Finally. I’ve tried so often to make those dense scones even a fraction lighter. Making a batter instead of a dough obviously helped. Second: No more tears, I mean crumbs, the original recipe can, on occasion, fall apart, and is always crumbly. These cut clean while hot. Lastly: They can be frozen, I’m double checking this and I’ll update the recipe with the info tomorrow, but it’s looking good. I’ve gotten this recipe to where I wanted it. These are dense still, with a firm chew to them, but they have a springy texture too that in a lot of ways reminds me of the scones of my youth. The apple seems a bit more prominent, but that might be due to the sugar. It’s still very mild, so you could use these with any filling or spread without fear of mismatched taste pairings.

So, here we are: A lighter scone. Finally. One that doesn’t take too much work to come together. A bit messy, but that’s not too much of a downside. As to what the future holds, well, I imagine a pumpkin purée pumpkin spiced version might be popular. Perhaps a savoury vegetable version too. A diary free option is a given, assuming I remember. The fact that they can probably freeze means no more trying to eat them all at once to avoid them going stale, which means I’m more willing to try something new with them. I’m really pleased with this recipe. There are times when I look at all I avoid using in my baking and think to myself: You’re doing okay. Oreos and scones, not too bad for a couple of days work. Who knows what the future holds, but knowing me it’s going to contain buckwheat. Until the next post.

Sesame and Chia Seeds to Decorate the Top before Baking

1. Add Buckwheat Flour, Sugar and Baking Powder to a bowl and set aside.

2. Blend Apple, Egg and Milk in a food processor or blender it becomes pale and foamy.

4. Add the Apple mixture to the dry ingredients and mix using a fork. A soft, thick, slightly sticky Batter will form. Rest for 10 minutes.

5. Pre-heat the oven to 200c (Fan) and line a baking tray with greaseproof paper. Wet hands and scoop up 1/4 Cup of of the dough, it will be soft and somewhat sticky, form into a ball, place onto the tray and press down gently. Repeat until dough is used up, wetting hands each time. Top with the Seeds if using and bake for 12-15 minutes or until Golden Brown, firm to the touch and hollow sounding when bottom is tapped. Transfer to a wire-rack and cool for 10 minutes.