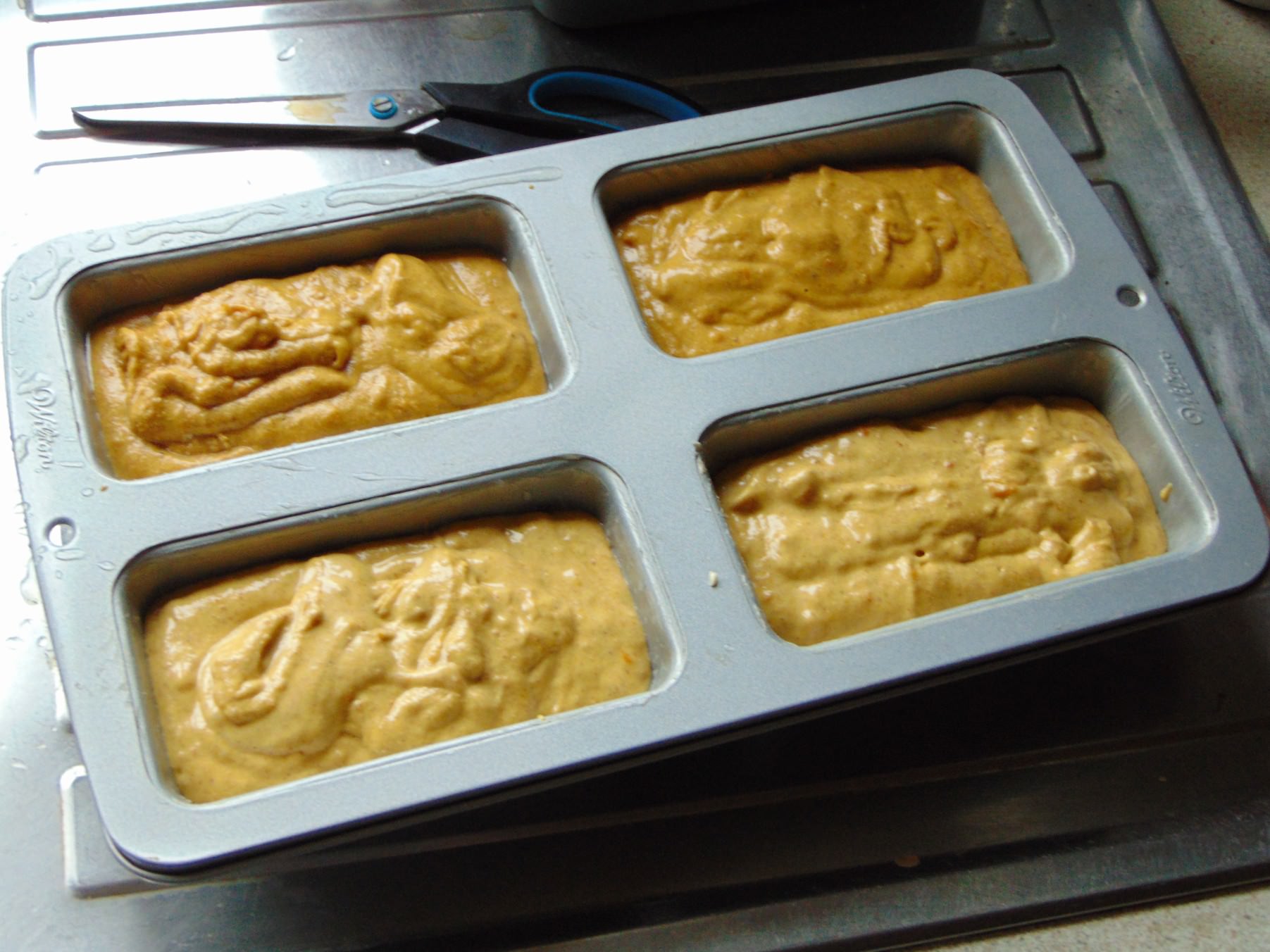 I like to bake it in two small tins. Better crust to interior ratio that way. 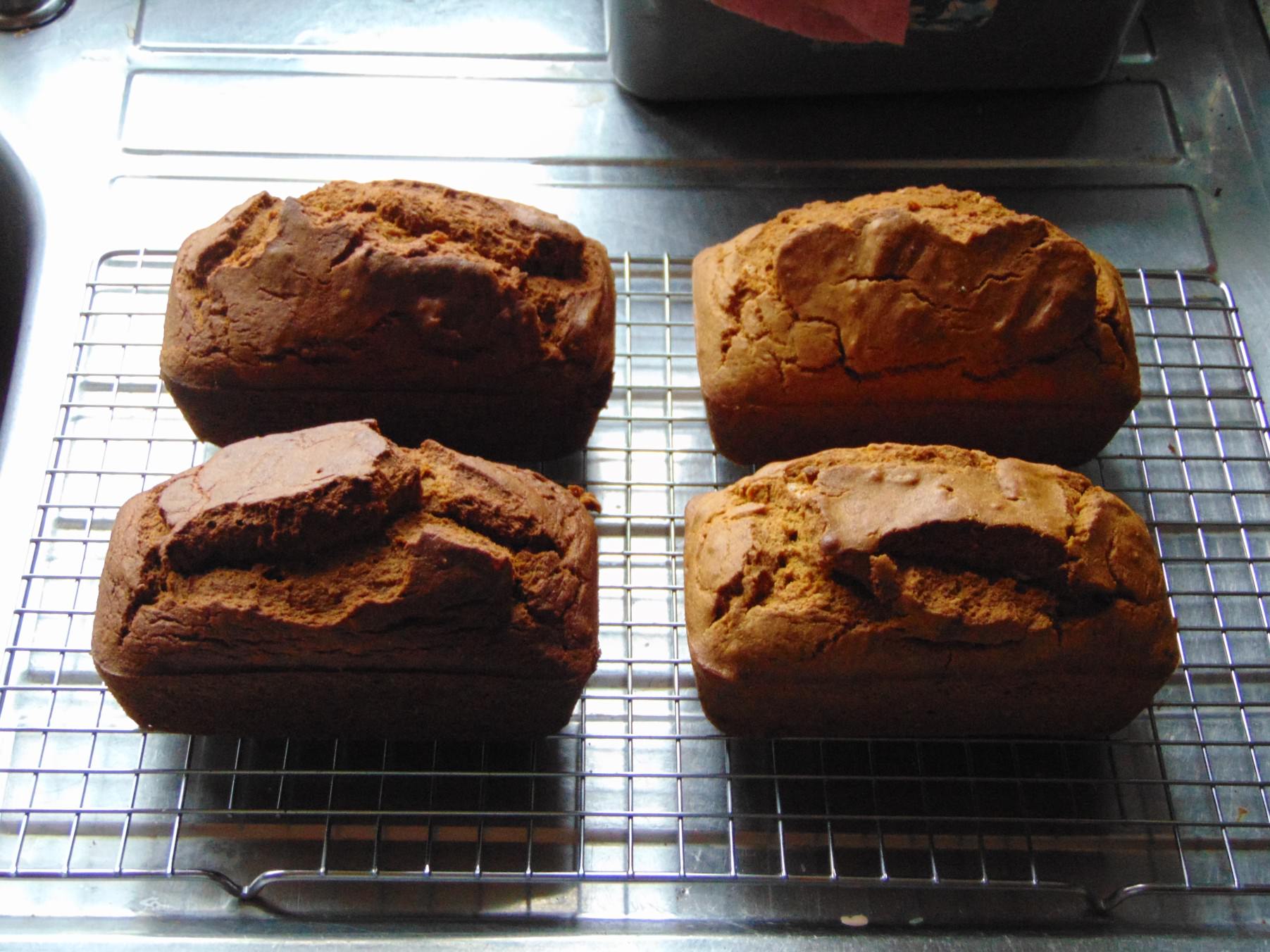 The light one is Peanut Butter and Uchiki Kuri.

29 October 2017 Update: It’s funny to think that I’ve been eating this bread for a couple of years now, if you’d like an in-depth look at it you can get that here, but I’ll give you a simpler rundown here to. This was born out of a need to have a bread that wasn’t plain or tasteless. I really disliked banana breads, for their often high sugar and their mushiness, I’ve always rebelled against mushy free-from breads, I’ve long since paid my dues and will not be returning to those. So instead of just banana I tried peanut butter, I’ve used nut butters extensively in my cooking and baking, they’re a real asset, but they can make the bread a little too dry, firm, but crumbly, so the banana, though I use squash more nowadays, brought the necessary moistness. So you have a flavoursome bread, a few extra additions don’t hurt either, well textured that cuts without crumbing and freezes beautifully. I’ve left out the hempseed in recent times as it sometimes felt too soft for my liking. Probably due to the squash’s moistness. Play around with the recipe, it’s pretty forgiving and I’m sure you’ll find a loaf that suits and satisfies you. Until later, dear reader.

This has been split off from the Buckwheat Flour Breads page as it’s getting a tad crowded in there. There’s also a new variation below. I’ll expand on that at the bottom of the page.

Makes 12 Slices.
Can be frozen.

3. In a large bowl mix together the Egg and Olive Oil. Add the Buckwheat Flour, Hempseed and Baking Soda and stir until combined, then add the Water and Maple Syrup and stir until a thick Batter has been formed.

4. Stir in the Mashed Banana until combined and finally stir in the Peanut Butter until everything has been blended together. Add more Water if Batter is too thick.

5. Pour batter into prepared tin and bake for 40 minutes, turning halfway if needed, until golden brown and a skewer comes out clean.

6. Cool in tin for 20 minutes, then remove and let cool completely on a wire rack.

Almond and Blueberry Loaf: Replace Peanut Butter with Almond Butter and replace Banana with 100g Frozen Blueberries. Prepare as usual and mix in Almond Butter first then fold in Blueberries and bake for 50 minutes. Top with Flaked Almonds before baking if desired.

I like the addition of nut butter to a bread, it adds a different taste than just spreading it on and it saves messing around with knifes and what have you. I also had to add some blueberries because nuts and berries are a great flavour combo, or fruit and nut as I thought of this, and it was just too tempting an idea not to try it as a bread. I eat this twice a week for teas with a high fibre cereal. I can’t buy breads to eat so I like to vary it up a lot to make up for the work it takes in making them. These would make great lunch box fillers as they really fill you up. It tastes really nice, it’s not sweet, but I could easily eat it plain without anything added. I will probably try making some chia jam and it’d go great with this bread. A watch-this-space if you will. I’ll keep this updated as I experiment with new combinations.